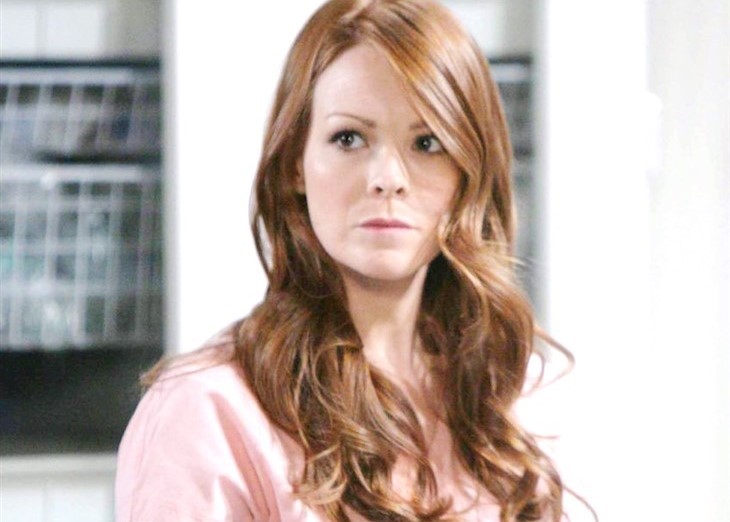 General Hospital spoilers tease that now that Ellie Trout (Emily Wilson) has left Damian Spinelli (Bradford Anderson), there could be some hope for “Spixie” to reunite in future episodes of General Hospital.

General Hospital viewers will note that in a recent episode of General Hospital, Maxie Jones (Kirsten Storms) still cares for Spinelli in a special way. It may not yet necessarily be in a romantic way, but the seeds are still there. Maxie and Spinelli have a child together, Georgie Spinelli (Lily Fisher). Maxie had asked Spinelli to take care of Georgie and James West, (Owen and Curtis Rufca) until she got back from Texas and found out Ellie had dumped Spinelli, so she amended her plans to take the children with her. Then she called Samantha McCall (Kelly Monaco), Spinelli’s longtime friend and private detective agency partner.

Maxie told Sam the situation with Spinelli being alone and asked her to look out for him while she was gone. It was obvious that Maxie really cares for Spinelli and was worried over him. That shows that a seed, if not a torch, of romantic love still exists. Besides, romance fades over time, and even though Ellie and Spinelli had been together for a long time, she left him for other reasons. He had been doing quite a bit of work for Jason Morgan (Steve Burton) and Ellie feared mob violence. Ironically, as General Hospital viewers will recall, that had been Sam’s reason for leaving Jason also! “Spixie” may not return hot and heavy, but the care that Maxie and Spinelli both share for each other is very deep and a very good foundation for something more.

GH Spoilers – Who Can Forget These Spixie Moments?

General Hospital viewers will recall many humorous, and some not so humorous, Spixie moments from over the years. General Hospital viewers will recall that Georgie was conceived amidst rather humorous circumstances, although Maxie may have secretly been trying to become pregnant on purpose. She had been playing the role of a surrogate for Lulu Spencer, then Lulu Falconeri (Emme Rylan) and tripped over a puppy at the door of her apartment. That part was humorous. It wasn’t so humorous when she realized she lost Lulu and Dante Falconeri’s (Dominic Zamprogna) embryo.

This was close to New Year’s Eve, and she found Spinelli depressed and dejected on the rooftop of General Hospital, and it turned out that Ellie had not shown up for their date. Spinelli was quite drunk and this was when they were first starting to date. Maxie took him home and the two wound up having sex. This was when Georgie was conceived. Another scene that some found humorous simply because the boxing match was such a mismatch, was when Maxie had become involved with the late Detective Nathan West (Ryan Paevey) who would later become her husband and the father of James West. Spinelli didn’t want to let Maxie go, and was determined to win a boxing match with Nathan “for the hand of the damsel Maximista!” General Hospital viewers will recall that Maxie and Spinelli have a long and caring history for each other, and there is definitely a chance that “Spixie” will reignite at some point in the future!