Maxie’s Baby Story Is A Hot Mess On General Hospital 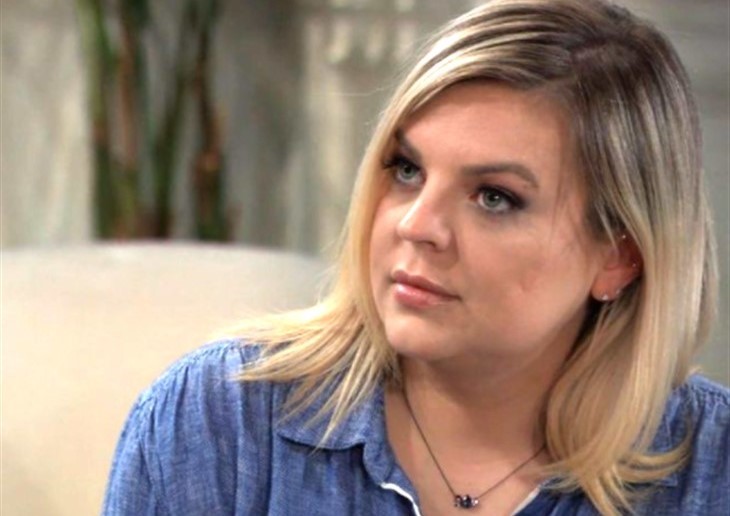 General Hospital spoilers reveal Maxie continuing with her baby ruse even though Nina will now know the truth, but this story that started with so much potential has become nothing more than a flaming hot mess.

GH loves baby switch stories and loves doing them with a twist. Three years ago we thought Maxie (Kirsten Storms) would be involved with a boilerplate baby switch story when she and Nelle (Chloe Lanier) were due around the same time, but Maxie ended up with her own healthy baby and Lucas (Ryan Carnes) and Brad (Parry Shen) ended up with Nelle’s baby. Oh, and then there’s poor Willow whose baby ended up dying, but that’s a whole other situation.

Making Maxie pregnant with Peter’s (Wes Ramsey) child was ill-conceived from the start since Peter is such a wildly unpopular character that the GH fandom unanimously hates. But, as Maxie’s pregnancy progressed we realized she really was going to have this baby. Then, she learned what a horrific human Peter was and decided she needed to keep her baby from him.

Then we had Brook Lynn (Amanda Setton), who slept with Valentin (James Patrick Stuart) months into Maxie’s pregnancy staring at a pregnancy test box before she left town and showing up massively pregnant a few months later.

We have to wonder if the writers intended to give the character an actual pregnancy and changed their minds, but if Brook was really pregnant or she needed a baby and kidnapped Maxie’s this story would make more sense. Instead, Maxie chose to fake her baby’s death and when that didn’t work, she told everyone Louise was kidnapped and then handed the baby to Brook Lynn. But why?

Peter may have been a horrible General Hospital character (and still may be as we are still not buying that he’s dead) but was he really that clever and terrifying that Maxie couldn’t have gotten round-the-clock police protection from her own stepfather who helps run the PCPD. Anna (Finola Hughes) couldn’t have tried to help her and the baby hide at a secret WSB location? None of that was possible?

Maxie had to hand her baby to Brook Lynn, make poor Valentin believe he has another daughter, and then constantly visit her child as if none of that is weird? It looks like both the writers and Maxie have dug themselves into a hole here and need to find their way out of this hot mess of a story soon.

Did Lindsie Chrisley Just Accuse Julie Of Causing Her Estrangement From Todd?