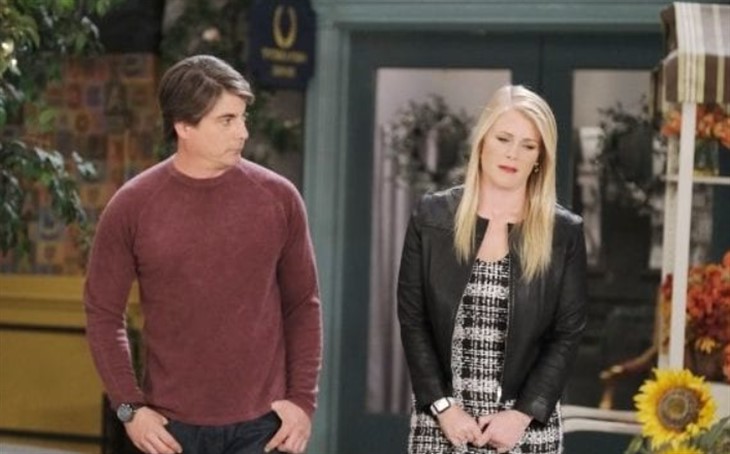 Days of Our Lives spoilers and rumors pose the question of if Sami DiMera (Alison Sweeney) and Lucas Horton (Bryan Datillo) might ever remarry in future episodes of Days of Our Lives! It’s a sure bet that EJ DiMera (Dan Feuerriegel) will divorce Sami because Kristen DiMera (Stacy Haiduk) will spill the beans!

Days of Our Lives viewers will remember that Sami and Lucas became passionate and had sex twice; the first time in the Salem Inn, and the second time in the wine cellar at the DiMera mansion where Kristen had stashed them. Days of Our Lives viewers will recall that Kristen, disguised as Susan Banks (Stacy Haiduk) had seen Lucas sneak out of Sami’s bedroom at the home of her mother and stepfather, Dr. Marlena Evans (Deidre Hall) and John Black (Drake Hogestyn). Kristen took the opportunity to blackmail Sami into helping her get Chloe Lane (Nadia Bjorlin) away from Brady Black, (Eric Martsolf) which had turned into a comedy of errors, starting with Sami wanting Lucas to seduce Chloe!

Lucas didn’t want to seduce Chloe and instead made up a story about having a terminal brain tumor, which got her attention, but not the kind of attention he wanted! She set up a second opinion with an oncologist who Sami replaced with Stan (Dan Wells) her male alter-ego.

However, Chloe had seen Stan before and she recognized “him” and said so! Lucas wanted to admit he’d lied, but Sami tried to cover for him as Stan! Worse yet, Chloe became suspicious of Kristen in disguise and Kristen knocked her over the head, tied her up, and put her in her trunk! Now, with Kristen desperate and angry she’ll make good on her threat to call EJ since Xander Kiriakis (Paul Telfer) wouldn’t kill them for her even though she offered him a good deal of money to do so!

Days of Our Lives spoilers show that Sami has been taking care of EJ for several years after she found he was alive – barely – in Dr. Wilhelm Rolf’s (William Utay) facility in Nashville, Tennessee. Kristen had been keeping EJ alive thanks to Rolf’s resurrection serum which Stefano DiMera (Joseph Mascolo) had instructed her to inject EJ’s body within the morgue after he was shot and killed by a disloyal bodyguard in a confrontation with Clyde Weston (James Read) over drug territory. Longtime Days of Our Lives viewers will recall that Elvis Aaron DiMera is the son of Susan Banks and Stefano DiMera which means Kristen is his half-sister by adoption.

No one knows where the “J” in “EJ” comes from, but it’s a little easier to pronounce than “EA”. He and Sami have two living children together; Johnny DiMera (Griffin and Aaron Kunitz) and Sydney DiMera (Berlin and Brooklyn Baca) and EJ have one deceased son, Daniel DiMera (unknown infant) mother, Nicole Walker (Arianne Zucker) miscarried.

EJ most certainly will want to divorce Sami when Kristen tells him she cheated on him with Lucas, and he most likely will want to retain sole custody of Sydney and Johnny, unless the Days of Our Lives powers that be SORAS them into adults! Sami doesn’t talk about her children back in Italy, so perhaps that is exactly what will happen and what Days of Our Lives viewers will find out when EJ returns on June 9! That would leave Lucas and Sami free to remarry, which it certainly looks like the potential is there!