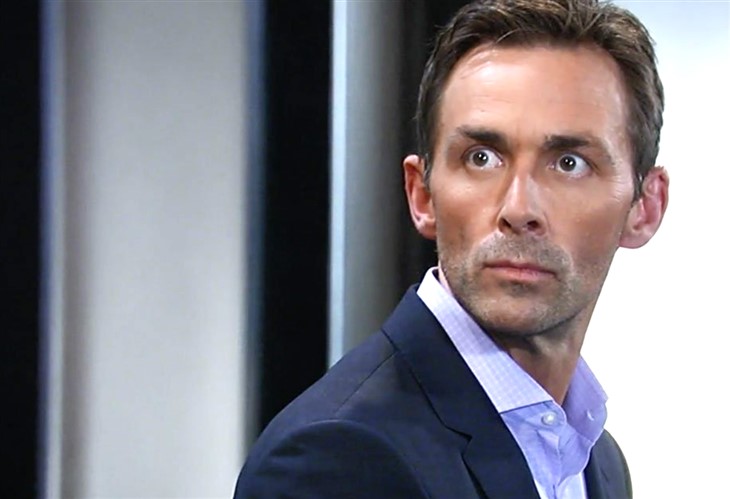 General Hospital spoilers and rumors tease that Valentin Cassadine (James Patrick Stuart) could have a long lost son in Greece – the musician at the bar that he and Anna Devane (Finola Hughes) had lunch at had a tattoo matching Valentin’s!

Valentin and the musician (Costa Nicholas), who played a mandolin through Valentin and Anna’s dinner, have the Cassadine crest as a tattoo in the same places on the same arms. That was revealed after Anna went to the bar after the musician got done playing and had gone to the bar to get a drink. Valentin had “fallen asleep” and Anna wanted to make sure someone was looking after him when she needed to leave the hotel for a short time after getting Valentin up to bed. She was assuming he’d passed out after drinking too much, although it was revealed later he’d been drugged.

General Hospital viewers know that the mandolin player doubling as bartender probably was the one who drugged him, but it is obvious that he and Valentin are strangers to each other. However, Valentin spent many years after WSB spy school as a mercenary, and it would be naïve to think that he didn’t have any romances during all those years!

But maybe the Cassadine crest ring is a rite of passage that Spencer isn’t old enough for yet. It would seem that rings go to direct heirs, while perhaps tattoos are on those Cassadines with not so provable parentage! Both Valentin and the musical bartender may have gotten their own tattoos in the absence of rings. It is doubtful that Valentin knows he has a son although the son may know he is a Cassadine – perhaps having been sent away to boarding school by Victor and now working for him!

Both Valentin Cassadine And His Possible Son Are Musicians

General Hospital spoilers show that Valentin is an excellent musician and singer, playing several different instruments. The bartender doubles as a musician, being very accomplished at playing the mandolin. Those were some very intricate stanzas that he played as Valentin and Anna dined. Viewers cannot be sure who Valentin’s birth father is, although other General Hospital spoilers and rumors tease it could be Victor, Valentin got his musical talent from somewhere!

Helena Cassadine (Constance Towers) was never known to sing or to play any musical instruments, and if any of her sons or her late daughter did it was never revealed. If the mandolin playing bartender is Valentin’s son from a long ago romance, even though Valentin doesn’t know about him Victor likely does – and he could also be a younger brother of Valentin as well! The two identical tattoos in the two identical locations have to mean something!