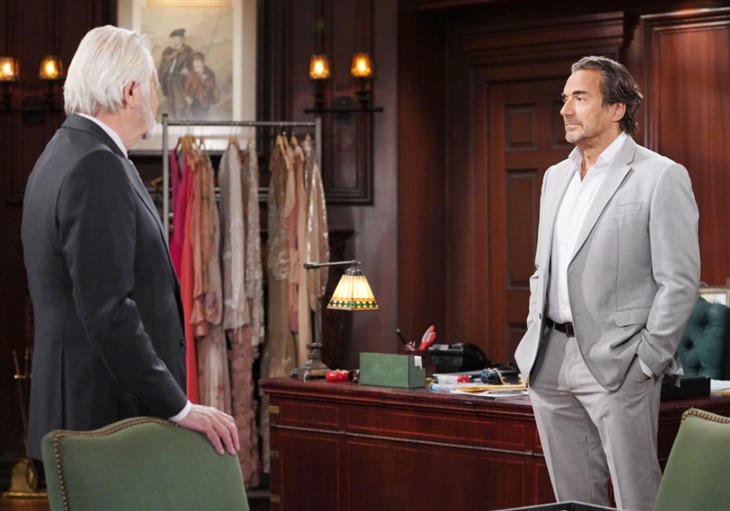 The Bold And The Beautiful Spoilers indicate that Ridge Forrester (Thorsten Kaye) will confront Eric Forrester (John McCook) about Quinn Forrester’s (Rena Sofer) claims that he wants her to have an affair with Carter Walton (Lawrence Saint-Victor). Will Ridge’s relationship with his father survive?

The Bold And The Beautiful’s Ridge could not believe his ears when Justin Barber (Aaron D. Spears) told him that Quinn has rekindled her affair with Carter. Ridge was in absolute disbelief when Justin told him that Quinn claims that Eric is behind the affair. Ridge cannot believe that his father would do anything like this at all. Ridge goes to Eric’s house and tries to throw Quinn out but his father stops him in his tracks. Eric doesn’t feel that he should have to explain things about his private life. However, Ridge keeps pushing and Eric finally tells him about his ED issues. Eric also confirms that he is behind the affair. However, Ridge is not happy and wants Quinn gone.

The Bold And The Beautiful spoilers say Eric shuts Ridge down when he tries to throw Quinn out. Eric does not want to be alone. Eric is fine with this relationship as long as Quinn is happy. Everyone that Eric has loved has left him including Ridge. Ridge has no right to get rid of the only person that Eric has with him. Eric names off a list of people who have been there and gone. Eric reiterates that he does not want to be alone. Eric and Quinn love each other and this is their arrangement.

B&B spoilers tease Eric is not happy with Ridge at all. Eric doesn’t understand who Ridge thinks he is to come into his home and make demands. Eric loves Quinn and Ridge needs to accept that. Ridge needs to concentrate on his own marriage and keep his nose out of Eric’s business. Eric wants both Ridge and Brook to keep their nose out of his business. Eric wants Ridge out of his house and his marriage. Eric is a grown man and can make his own decisions about his marriage. Ridge simply needs to go now.

Eric and Quinn have worked out their relationship to suit their needs. Eric feels that as long as he and Quinn are happy, it is really no one else’s business. Will Ridge do as Eric asked and stay out of his marriage? Will Eric cut ties with his son if he doesn’t stop interfering?