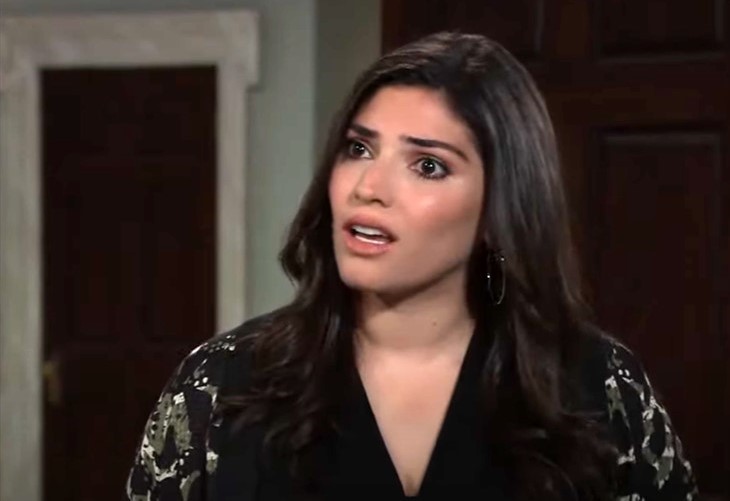 General Hospital Spoilers tease that Brook Lynn Quartermaine (Amanda Setton) is walking a fine line when it comes to Valentin Cassadine (James Patrick Stuart). She’s been counting on Valentin’s protection from Peter August (Wes Ramsey) while at the same time keeping from him that the baby he believes is his own is actually Maxie Jones’ (Kirsten Storm) baby with Peter. As viewers know, Maxie and Brook Lynn made a deal that Brook Lynn would care for the baby until Peter was brought to justice. Brook Lynn had her own reasons for the agreement.

General Hospital Spoilers – Deception Was The Name Of The Game!

It all started when Valentin tricked Brook Lynn into signing her shares of ELQ to him. The did have a night of passion but Brook Lynn got an idea. If she pretended to be pregnant by Valentin, Brook Lynn figured that she could get the shares back. The plan worked but only after the baby was born. So although this all started as just a business arrangement, Brook Lynn has grown to care for the baby. And she is safe from Peter under Valentin’s protection. But spoilers tease that Valentin may soon be abducted.

GH Spoilers – Brook Lynn Quartermaine May Have Reason To Be Concerned.

If Valentin is indeed abducted by Victor Cassadine (Charles Shaughnessy), Brook Lynn may have reason to be worried. Victor seems to have eyes and ears everywhere and he has been working closely with Peter. If Victor has somehow found out that the baby Valentin believes is his is actually Peter and Maxie’s, he may not only tell Peter but Valentin as well. So not only would Brook Lynn no longer have Valentin’s protection, but Peter may be on his way at any time.

If Peter discovers the truth, Brook Lynn may find herself in danger. And although the Quartermaine have their own security they won’t likely stand a chance against the combined might of Peter and Victor. Peter won’t take kindly to being deceived and might just take his anger out on her. Peter doesn’t mind committing murder to get his way, and Brook Lynn may just become his next victim.

Does Victor know the truth about the baby? Will he clue Peter in? Is Brook Lynn in danger from Peter? Anything can happen in Port Charles so stay tuned to General Hospital airing weekdays on ABC. And don’t forget to check back right here regularly for all your General Hospital news, information and spoilers!

Days Of Our Lives (DOOL) Spoilers: Will Paulina Give Abe A Big ‘Yes’?