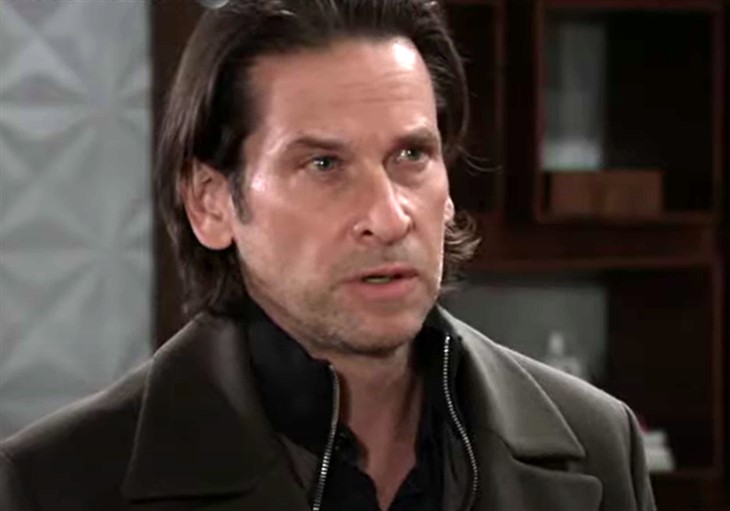 General Hospital (GH) spoilers and rumors tease that there will be no miracles for Franco Baldwin (Roger Howarth). As viewers know, Franco’s brain tumor returned and it won’t be long until the former serial killers succumbs to it. Unfortunately, the tumor is inoperable and Franco is already weakening.

GH spoilers tease Franco wife’s, Elizabeth Baldwin (Rebecca Herbst) and his stepson Cameron Webber (William Lipton) are devastated but they are trying to make the most of whatever time they have left together.

General Hospital Spoilers – Franco Baldwin Has Had A Hard Time

The first time Franco suffered from a brain tumor on General Hospital, it turned him into a monster. He murderous impulses led him to torture several resident of Port Charles, Those who survived like Sam McCall (Kelly Monaco) and Maxie Jones (Kirsten Storms) were never able to forget the horrible things that Franco did..

And even though he has been an upstanding citizen since the first tumor was removed, his past followed him everywhere he went. Most notably, Jason Morgan (Steve Burton) would like nothing more than to rid the world of Franco. Franco is well aware of Jason’s hatred, so he has asked the hitman to end his life if he shows any signs of reverting to his evil ways.

GH Recaps & Spoilers – Franco Baldwin Was Implanted With Drew Cain’s Memories Against His Will!

Over a year ago on General Hospital, Franco was forced to have Drew Cain’s (Billy Miller) memories implanted in his brain. For a while, Franco believed that he was Drew. Eventually, Franco had the procedure reversed and it was assumed that since he once again was himself, that the Drew memories were gone forever. But recently, franco has been hearing Peter August’s (Wes Ramsey) voice in his head. This is because Drew’s memories include proof of Peter’s past criminal actions.

General Hospital Spoilers – Peter August Has Up Until Now Been Able To Keep His Past A Secret!

Peter was Helena Cassadine’s (Constance Towers) partner is several criminal endeavors, and although several people have long suspected Peter’s guilt, he’s always found a way to make sure there is no evidence against him. In the process, he framed Dr. Leisl O’Brecht (Kathleen Gati) for his most recent crimes, such as Drew’s murder and the attempted murder of Andre Maddox (Anthony Montgomery). All the while, Peter has been pursuing a romantic future Maxie, and the two are about to be married.

Perhaps Franco will agree to undergo some form of hypnosis. This could possible allow Franco to tell the world exactly what Peter has done. And one he is exposed, it’s a safe bet that not only will Maxie call off the wedding, but Peter will be arrested and tried. But sadly, Franco will be dead by then. But Liz and Cameron will be able to take some comfort in the fact that no matter what he did in the past, Franco will have died a hero@!

How much longer does Franco have left to live? Will he agree to hypnosis in the hopes of accessing Drew’s memories? And will the former serial killer be able to die peacefully knowing he helped take a danger criminal off the streets?

The lines between good and evil are often blurry in Port Charles, so stay tuned to General Hospital airing weekdays on ABC! And don’t forget to check back right here regularly for all your General Hospital news, rumors, and GH spoilers!