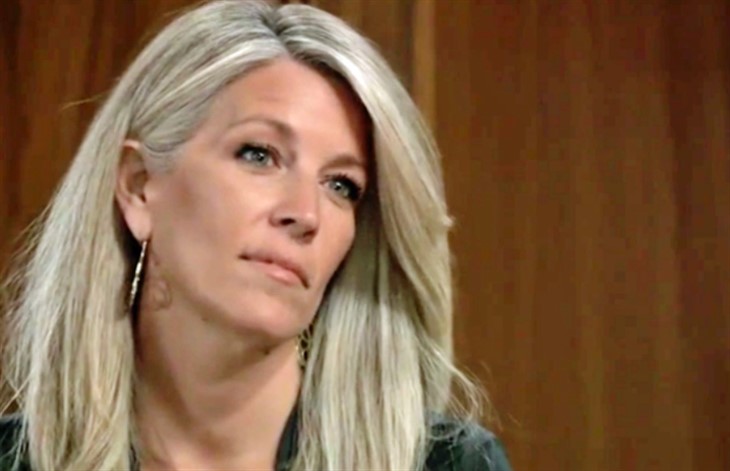 General Hospital (GH) spoilers for Friday, May 14, 2021, reveal Carly becoming the woman she seemingly always wanted to be.

Carly (Laura Wright) officially took over for the Corinthos Crime Family when she held her own at the meeting of the Five Families last week. Apparently, Jax (Ingo Rademacher) does not like her new role at all because he insists that Josslyn (Eden McCoy) move in with him. He never liked Carly being married to Sonny (Maurice Benard) and his daughter involved with that life, but that was when he thought Sonny was alive and Carly was not as involved.

What Jax said probably sent fear and chills up Carly’s spine because, on Friday, she is ready to change her will.

Meanwhile, Sonny is losing his criminal instincts after getting caught trying to get dirt on Elijah and Phyllis wants to know what the heck he is up to and why.

We move away from the mob for a bit so Maxie (Kirsten Storms) can get some surprising news from her doctor. Who wants to bet that the baby is breech and Maxie will have to have a C-section? She also wants to know what someone is doing there and we bet that someone is a lurking Peter (Wes Ramsey).

Over at the Q mansion, Valentin (James Patrick Stuart) and Ned (Wally Kurth) have an argument, which causes Brook (Amanda Setton) to wonder if he is ready to back out of their ELQ deal if he can have access to the baby he thinks is his.

Brook is also blindsided by Valentin’s latest idea. Does he want to be in the delivery room with her to see his alleged baby be born? If that’s the case, Brook is in a whole lot of trouble and so is Maxie.

General Hospital Spoilers – Another Baby On The Way

Just when Maxie’s ill-conceived pregnancy seems to be winding down, we have a pregnant Sasha (Sofia Mattsson). Gladys (Bonnie Burroughs) heard her asking for morning sickness pills and will either run to Brando with the news or keep it a secret.

Whatever she does, Port Charles’s latest expectant mom has a run-in with Cyrus (Jeff Kober) that’s sure to make her pregnancy not-so-stress-free. Stay tuned to General Hospital weekdays to see how these stories play out.