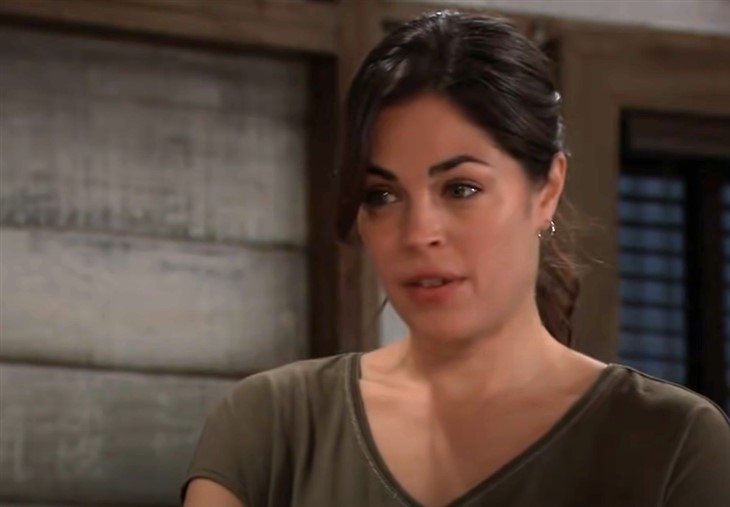 General Hospital (GH) spoilers for Wednesday, May 12, 2021, reveal Britt trusting Jason enough to tell her what’s been really going on with her health.

Even when Jason (Steve Burton) was still behind in the PCPD lockup, he noticed Britt’s (Kelly Thiebaud) hands shaking but didn’t question her about it. Now that they are on the run together, the shaking is more frequent and noticeable and Jason finally convinced Britt to tell him what the heck is going on.

She still has not confirmed her diagnosis, but tells Jason she believes she had Huntington’s Disease like her father, and if she does, she’s doomed because there is no cure.

Meanwhile, Sam (Kelly Monaco) must not be happy about Carly (Laura Wright) telling her she can’t know anything about the mob anymore, so she gets on the phone with someone (we are guessing Spinelli) and tells them she can help Jason getaway. Sam truly must be bored. Even Maxie (Kirsten Storms) didn’t want her help, so what’s a girl to do? Go break the law, of course. How will Dante (Dominic Zamprogna) think about this?

Carly and Jax (Ingo Rademacher) have a confrontation on Wednesday when they discuss Josslyn (Eden McCoy) and what the heck was going on in Pennsylvania. Jax is angry too and they argue about her mob involvement.

Then, Carly has a talk to Josslyn and she tells Joss she needs to make a decision. Is this about college or Cameron?

Your Port Charles pals decide they are going to have a night out and this time they choose the Metro Court. That’s where you’ll find Curtis (Donnell Turner) and Portia (Brook Kerr) growing closer than ever before and Ava asking Trina what is wrong.

Trina had quite an emotional time discussing police and racism with Cameron (Will Lipton). Will she tell Ava (Maura West) what is on her mind?

Ava also spends some time with her husband where they discuss Nikolas’s (Marcus Coloma) involvement with Cyrus (Jeff Kober). He tells Ava that his uncle from his mother’s side is about to meet his father’s side of the family. Watch out, Cyrus. Stay tuned to General Hospital weekdays to see how these stories play out.