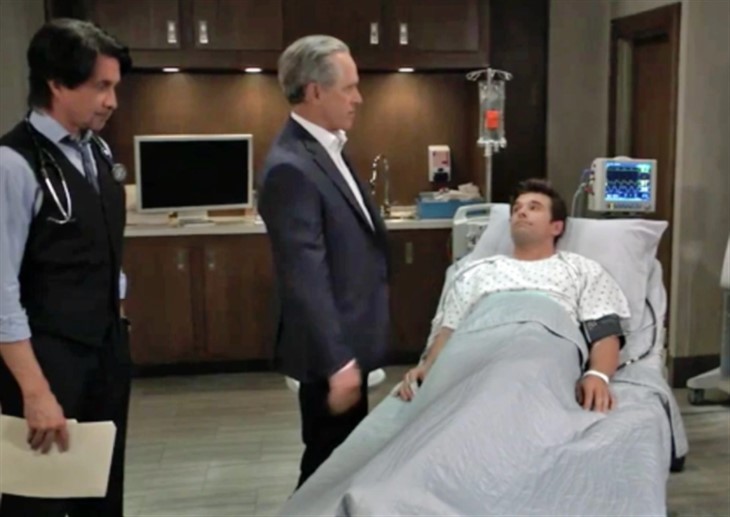 General Hospital (GH) spoilers for Tuesday, May 11, 2021, reveal Finn freaking out when Chase’s condition takes a turn for the worse.

When Chase (Josh Swickard) started to recover, Finn (Michael Easton) and Anna (Finola Hughes) wondered if the antidote from Peter (Wes Ramsey) would be enough or would they need more. Well, it looks like they need more as Chase goes from bad to worse quickly. Finn frantically tries to find Anna to see what they should do next.

Willow (Katelynn MacMullen) realizes there is no way she can break up with Chase now, so once again she tells Michael (Chad Duell) they are going to have to wait. Being the understanding fella that he is, Michael will of course wait. Poor Chase, but lucky Willow, right?

Meanwhile, Peter tells someone they must do exactly as he says cause Peter is the big bad in charge.

And then we have Maxie (Kirsten Storms) and her new nurse. It looks like Peter sent her because spoilers say Maxie is tricked. She is also confused about how the nurse knows she is having a girl.

GH Spoilers – On The Run

Sam (Kelly Monaco) and Dante (Dominic Zamprogna) are still searching for Britt (Kelly Thiebaud) and Jason (Steve Burton), with Britt fearful about what’s going to happen next. She is also worried about Maxie and has no idea she found someone to take care of her baby while she fakes its death. However, she doesn’t want to leave Jason by himself.

That’s why Dante is a little confused when Brook Lynn (Amanda Setton) starts defending Britt. Little does he know she needs Britt fast to pull off her fake baby scheme.

Jordan (Briana Nicole Henry) and Portia (Brook Kerr) don’t always get along, but as two strong women of color, they have had to face many of the same challenges. The two women get together on Tuesday and discuss the similarities in their lives that are solely due to race.

Cameron (William Lipton) also gets a reality check from Trina (Sydney Mikayla) when she tells him about her experiences with racism in America. Stay tuned to General Hospital weekdays to see how all these stories play out.