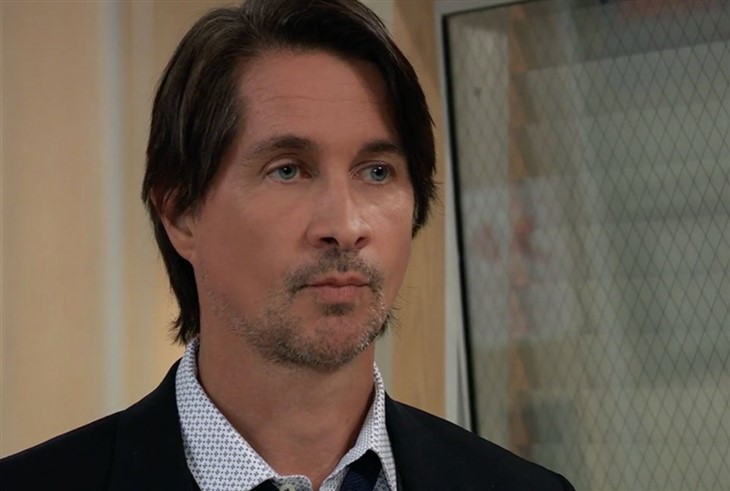 General Hospital (GH) spoilers for Wednesday, June 16, 2021, reveal in Port Charles, NY Finn losing it over just about everything and Willow not knowing which way to turn.

Finn (Michael Easton) is desperate to find a cure for Chase (Josh Swickard). He can’t accept that not only did he fail him but he also might have made him worse. Anna (Finola Hughes) can see how much pain Finn is in and promises him they will find Peter and find a real cure. Finn tells Anna that he knows they will never find Peter (Wes Ramsey) and Anna wants to know why he’s so sure.

But before he gets a chance to answer her, he has an idea. Has it occurred to him yet that maybe, just maybe, the DNA tests run earlier this year were wrong?

As for the man who messed with those tests, Cyrus (Jeff Kober)? Well, he is recovering nicely and very happy to have a new visitor. The person who is not very happy is Willow (Katelyn MacMullen). She has to answer yet one more person why she agreed to marry Chase. She doesn’t even know if her reason is a good one.

Sasha (Sofia Mattsson) may want to know why Willow would marry a man she doesn’t love even if he seems to be dying, but she is also quite focused on her own future. Now that her pregnancy is out in the open and Cyrus is out of their way, Sasha and Brando (Johnny Wactor) want to be together. To that end, Brando visits with his cousin’s family.

Somehow he allowed Jason (Steve Burton) and Carly (Laura Wright) to take over his life because he goes to them to ask what his future might be. Do they have to give him permission for whatever he decides to do next?

It looks like Curtis (Donnell Curtis) is doing a lot better because he’s dressed and out of bed and visiting with Nina (Cynthia Watros). They discuss each other’s respective lives and he tells her he thinks he missed a big chance.

Is he talking about Portia (Brook Kerr)? Laura (Genie Francis) certainly wants to know how she is doing and what’s going on between her and Curtis.

Elsewhere in the hospital, Britt (Kelly Thiebaud) apologizes to Elizabeth (Rebecca Herbst). But what is she apologizing for? Cutting her hours? Being Peter’s sister? Letting Cyrus take over? There are so many things. Stay tuned to General Hospital weekdays to see how these stories play out.

Days Of Our Lives (DOOL) Spoilers: Claire And Allie Find A Dead Body – Another Murder Mystery In Salem This Summer