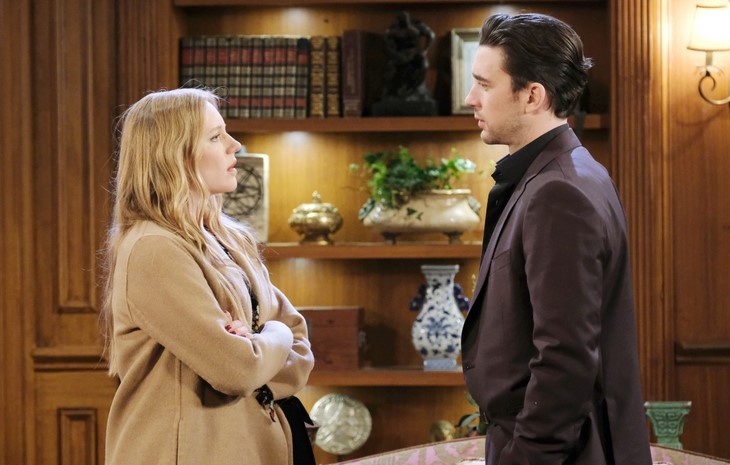 Days of Our Lives spoilers reveal that Rafe Hernandez (Galen Gering) is searching for an escaped felon. Kristen DiMera (Stacy Haiduk) escaped and not only is Xander Cook (Paul Telfer) questioned, but so are Chad DiMera (Billy Flynn) and Abigail DiMera (Marci Miller). Will Rafe learn that one of the people responsible is his own girlfriend, Ava Vitali (Tamara Braun)?

DOOL spoilers reveal that Kristen was desperate not to get caught as she knew it would mean going back to prison. Despite her desperation, Kristen couldn’t help but see her daughter. Kristen never managed to get out the door with Rachel Black (Finley Rose Slater), though. The clock was ticking for Kristen after her arrest. Once she learned that the transfer to Statesville would happen within the hour, she became even more desperate to escape.

Kristen managed to get free once she coerced Ava, who dragged Gwen Rizczech (Emily O’Brien) with her. Both Ava and Gwen have a lot to lose, which is exactly what Kristen was counting on.

It is teased that EJ DiMera (Dan Feuerriegel) will pay Ava a visit. The unexpected arrival of EJ puts Ava on edge. However, it has nothing to do with Sami DiMera’s (Alison Sweeney) disappearance. EJ figures out that Ava helped Kristen escape and that’s what he wants to talk to her about.

Days Of Our Lives Spoilers – Xander Cook And ‘Chabby’ Questioned

Days of Our Lives spoilers reveal that EJ’s visit to Ava probably comes after “Chabby” gets a visit from the police. Rafe brought Xander in for questioning as he was the last person to step into Kristen’s interrogation room. However, that interrogation goes nowhere as Xander is innocent. One other person that stopped in to see Kristen was Chad, so Rafe will ask him some questions. Of course, Chad had nothing to do with Kristen’s escape, which means Rafe still has no leads.

The police station must have security cameras. However, there are probably multiple cameras to go through, which requires manpower. Eventually, Rafe will be notified that Gwen and Ava were seen talking to a few guards. Ava and Gwen might come up with a good cover story, but the truth always comes out at some point. How will Ava explain to Rafe that she had no choice and isn’t responsible for just one of Kristen’s escapes, but both of them?

Let us know what you think is going to happen when Rafe investigates Kristen’s escape. Will he eventually find out Gwen and Ava were involved? What does that mean for Gwen and Ava’s futures?