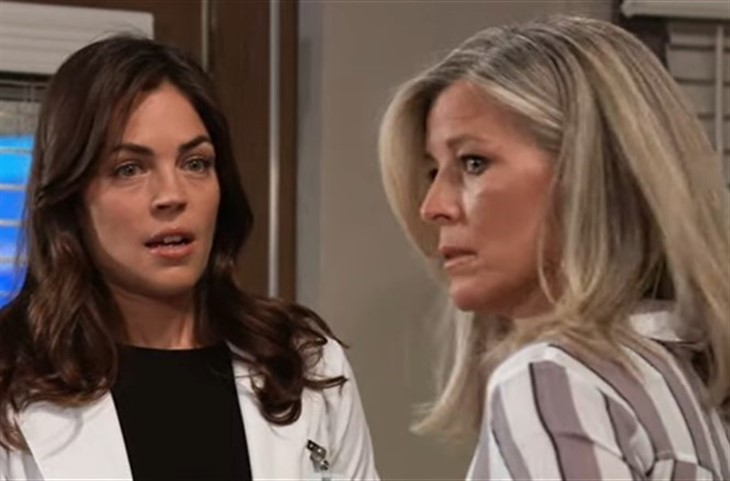 General Hospital (GH) spoilers for Wednesday, December 1, 2021, reveal an emotional and angry confrontation between Carly Corinthos and Britt Westbourne over who else but Jason Morgan.

Carly (Laura Wright) is having a harder time dealing with Jason’s (Steve Burton) death than Sonny (Maurice Benard) and Monica (Leslie Charleson) are because Carly married that man and was about to make love to him before Sonny so rudely interrupted them with the fact that he’s alive and well.

However, Britt (Kelly Thiebaud) may be having as hard a time as Carly as she blames herself for what happened to Jason and tells Carly just as much on the famous bridge. Carly pretty much blames Britt too, so this doesn’t go well as Carly lashes out at Britt like a typical Carly. Will Britt want to throw herself off the bridge when Carly is done?

And speaking of this famous bridge, why is either of these women there? That was Jason and Robin’s (Kimberly McCullough) bridge and had nothing to do with Carly and Britt. Let’s not rewrite history once again, GH.

Meanwhile, Sonny is determined to make sure Cyrus Renault (Jeff Kober) doesn’t use Jason’s death to his advantage and asks for Spinelli’s help with a few things.

Sam McCall (Kelly Monaco) may be shocked by the fact that Drew Cain (Cameron Mathison) is alive and Jason Morgan is dead, but she has also moved on with her life. This reversal of the brothers has her a bit frazzled but that doesn’t mean she doesn’t want to be with Dante Falconeri (Dominic Zamprogna).

And Dante certainly wants to be with Sam so this pair finally takes their relationship to the next level.

Clearly, Sam did not want to be with her newly-freed mother for Thanksgiving as Alexis (Nancy Lee Grahn) throws her own shindig — and it looks like Ava Jerome (Maura West) and Nikolas Cassadine (Marcus Coloma) are guests. Uh-oh?

Back at Monica’s house, she is still reeling over the fact that Jason is gone, but Ned Quartermaine (Wally Kurth) is reeling at the fact that they can have Drew’s ELQ shares back in the company.

As for Brook Lynn (Amanda Setton) and Harrison Chase (Josh Swickard), they have more lies to tell when Mac Scorpio (John J. York) comes looking for them to ask about Valentin Cassadine (James Patrick Stuart). Stay tuned to General Hospital weekdays to see how these stories play out.