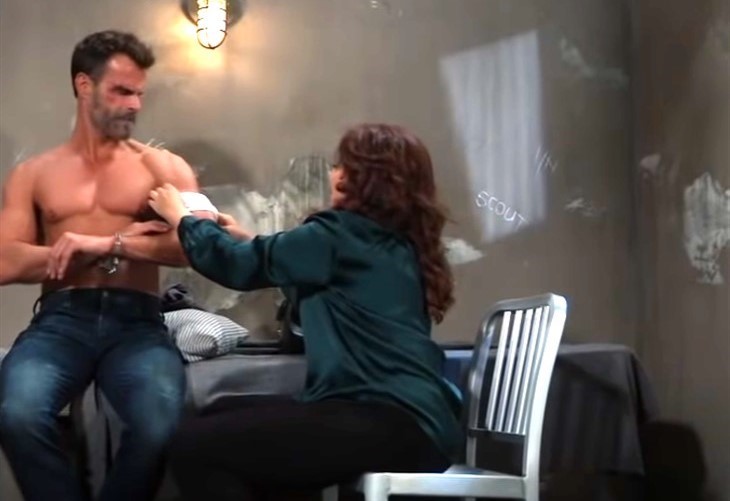 General Hospital (GH) spoilers for Tuesday, October 19, 2021, reveal a day where Drew’s life is on the line once again. Peter August managed to shoot him, plunging him into the water when all any GH fan wanted was a bullet in Peter already.

Sam McCall (Kelly Monaco) finally got confirmation that Drew Cain (Cameron Mathison) is alive and Scout could finally get to know her father. Poor Drew was even using an image of Scout in his mind to escape Peter’s (Wes Ramsey) mind control games, but of course, The Great Mustache-Twirling Villain Of Port Charles struck again and managed to shoot Drew in the back, and on Tuesday, we get to see if he survives the rough waters he fell straight into.

At least Anna Devane (Finola Hughes) and Robert Scorpio (Tristan Rogers) are there to help Valentin Cassadine. It looks like he was also shot. Will Victor Cassadine try to avenge his son’s shooting and help us get rid of Peter? We doubt we could ever get so lucky.

GH spoilers also say that Sam and Dante (Dominic Zamprogna) make a shocking discovery. Do they find Drew on the shore? And is he still alive? And will Jason Morgan (Steve Burton) and Britt Westbourne (Kelly Thiebaud) make it to Crete to save Liesl (Kathleen Gati) in time since it looks like they are about to get some very disturbing news?

GH Spoilers – Another Night At The Savoy

Back in Port Charles, it doesn’t seem to matter that Spencer Cassadine (Nicholas Chavez) is wasting away in jail. Nikolas Cassadine (Marcus Coloma) and Ava Jerome (Maura West) are going to celebrate being back together, her not leaving town, and the both of them being safe from her ‘stalker.’

To that end, they make their way to The Savoy for a date night. Do they care about Spencer at all and will it get back to him that his father and stepmother were enjoying a night out on the town while he languishes behind bars?

Elsewhere at The Savoy, Curtis Ashford (Donnell Turner) and Portia Robinson (Brook Kerr) continue to bond and enjoy their time together — while a mysterious man lurks and watches them. That conversation about Curtis’s childhood had to have a good reason, right? Maybe this man is the father Curtis spoke of and things are about to get interesting for our former cop and detective turned nightclub owner. Stay tuned to General Hospital weekdays to see how these stories play out.