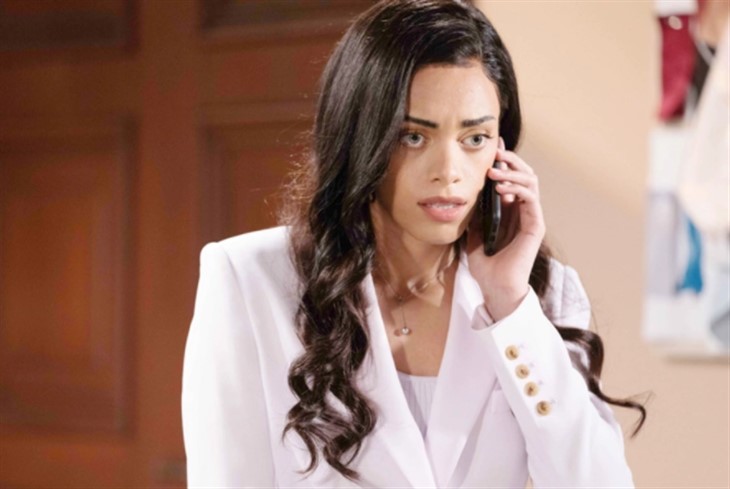 The Bold and the Beautiful spoilers document that Zoe Buckingham (Kiara Barnes) is trying to convince herself that Zarter can reconcile. She wants to believe that Carter Walton (Lawrence Saint-Victor) needs more time to heal and will eventually forgive her.

However, Carter was heartbroken by Zoe’s unfathomable betrayal, where she pursued Zende Forrester Dominguez (Delon de Metz) for months while Zarter’s engagement continued. Carter has been unable and unwilling to simply forgive Zoe, which has further destabilized Barnes’ character.

Now, as Barnes’ on-screen exit nears, Zoe is positioned to learn that Carter has a new romantic interest.

The Bold And The Beautiful Spoilers – Irony In Los Angeles, California

So, Zoe likes Carter until Zende turns her head. Carter later learns the humiliating truth and has become involved with Quinn Fuller Forrester (Rena Sofer) as a form of rebound and partially due to loneliness.

The memorable scene where Zoe sang a capella for de Metz’ character, while he recorded her through his smartphone, felt like the type of daytime moment that was the start of a ZoZende relationship. It proved not to be that, instead of becoming part of the main storyline where Zoe’s rushed engagement to Carter eventually collapsed.

Quinn appears incapable of living ethically. Eric Forrester (John McCook) has given her more leeway and redemptive opportunities than most mortals ever would. He did that because of love and, to be balanced because Quinn genuinely did bring unique joy to his life. With did being the right past tense verb to use in the last sentence.

Take Carter’s heartbreak and anger, then multiple that by at least one hundred. That’s the level of emotional devastation Eric will be at when he learns that his wife has veered off-course again, with this time almost certainly proving to be the event that breaks Queric.

The Bold And The Beautiful Spoilers – Zoe Buckingham Won’t Relent

Zoe realized too late that her actions were extremely immature and fully disrespectful toward Carter. It’s not an excuse to say that she embraced him because of the broken love connections to Xander Avant (Adain Bradley) and Thomas Forrester (Matthew Atkinson).

A reasonable explanation for all that Zoe has done since she first debuted on B&B in 2018, can be paired with her quest for stability. So, viewers should expect the realization that Carter has moved on to be fierce.

Zoe’s projected awareness that an assumed confidant, Quinn, betrayed her will surely lead to major fireworks after the Quarter secret is broken.

Soap Opera Spy is a leading source for everything linked to The Bold and the Beautiful. Check back regularly for B&B spoilers, updates, and more soap opera news!