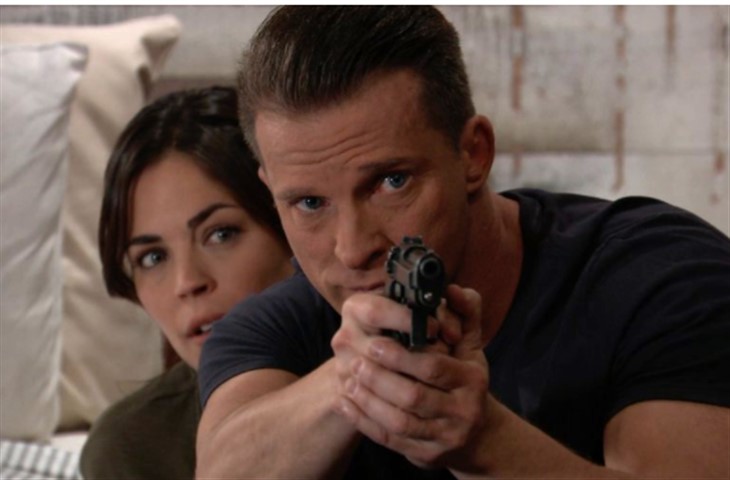 General Hospital (GH) spoilers say that both Jason Morgan (Steve Burton) and Britt Westbourne (Kelly Thiebaud) are going to be getting rather up close and personal in the coming days, but that’s not because they want to. Rather, it’s because they have to as they are both forced to flee their original safe location. With that said though, Britt makes it pretty clear from the get-go that she’s not too pleased about the situation that they are in together. Here’s what you need to know.

In the latest issue of Soap Opera Digest, actress Kelly Thiebaud, who plays Britt on the hit ABC soap, says that being on the run is the last place her character wants to be right now. She puts it this way, “Britt has so much going on. She feels guilty about Jason getting shot. She’s concerned about being on the run while experiencing hand tremors because no one knows and what if Jason starts noticing what’s going on with her? She’s concerned about leaving Maxie and what’s going to happen with the baby. So much to worry about!”

General Hospital spoilers say that as a result, things between Jason and Britt get a little tense and that’s when Britt decides to storm out and let Jason go at it alone, just because she needs a break from it all. She also thinks that Jason isn’t taking her seriously.

But at the same time Kelly says that her character, “cares for him, she’s concerned about him and I think she feels she owes him.”

General Hospital spoilers tease that when Britt comes back, she changes Jason’s bandages, and while she’s busy doing this, he tells her how much he appreciates her for helping him survive after he got shot and for sticking with him. Still, Britt feels as though this is still all her fault and before they know it, the two of them are back to bickering.

Needless to say, GH fans will have to tune in this week to find out what will happen next. General Hospital airs weekdays on the ABC network. Check your local listings for times. Are you a fan of daytime television? Be sure to catch up on everything happening with General Hospital right now. Come back here often for all the latest General Hospital spoilers, news, and updates.