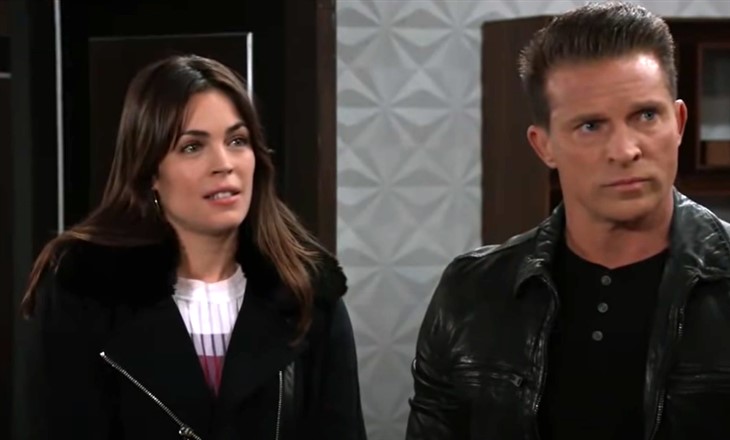 General Hospital (GH) spoilers tease that most Port Charles residents are unaware of how close Jason Morgan (Steve Burton) and Dr. Britt Westbourne (Kelly Thiebaud) have gotten during their adventure in Canada will on the run from Cyrus Renault (Jeff Kober) and the authorities.

General Hospital viewers will remember that Jason had been framed for killing Franco Baldwin (Roger Howarth) and was arrested with no bail pending trial. Not willing to let Jason sit in prison for a crime he didn’t commit, Carly Corinthos (Laura Wright) arranged for Shawn Butler (Sean Blakemore) to stab Jason just bad enough that he would need to be treated at General Hospital.

General Hospital Spoilers – Dr. Britt Westbourne Was In On The Plan With Carly Corinthos!

While there has been no love lost between Carly and Britt, they worked together to facilitate Jason’s escape from the hospital and police custody. Britt was to go somewhere very public to create an alibi but Jason knew something was wrong when Britt’s car was still in the parking garage.

Risking capture, GH recaps and spoilers reveal Jason saved Britt who was about to be killed on Cyrus’ orders. Luckily the two of them made it back to the getaway car, although Jason was shot at the last minute. But luckily for Jason, Britt is an amazing doctor and after some tense moments and a transfusion of blood from Carly, Jason was saved.

GH Spoilers – Jason Morgan And Dr. Britt Westbourne Made Love On The Run!

As they continued to get closer, Jason and Britt couldn’t deny their feelings any longer and they made love. Jason made it clear that he cares for Britt and for her part, Britt certainly feels the same way. But things could get complicated very quickly now that all parties are back in Port Charles.

While Carly has told Jason that she has changed her opinion of Britt, that certainly doesn’t mean she will support a relationship between them if that’s the direction the couple go in. But Carly and Britt seem to have come to an understanding of sorts, so it won’t likely be Carly who interferes in the new romance.

General Hospital Spoilers – Sam McCall Will Regret Her Decision To Break Up With Jason Morgan!

Jason and Samantha McCall (Kelly Monaco) have been together on and off for many years now on General Hospital. And just when the way seemed to have finally cleared for Jason and Sam to finally reunite, the threat of Cyrus made Sam fear for her children’s lives. Cyrus was one of the most dangerous enemies Jason had ever faced because he wouldn’t hesitate to target a child to get at Jason.

General Hospital recaps and spoilers show Sam decided that she and Jason couldn’t be together and that would stop Cyrus from threatening Jason’s son. Her decision seemed silly because whether and Jason was together or not, Cyrus could still threaten any of his children at any time. But Sam made the decision and although miserable, she and Jason stayed away from one another.

GH Spoilers – Jason Morgan Sent Sam McCall Back Home When She Tried To Join Him On The Run!

Sam couldn’t stand that Jason was on the run for a crime he didn’t commit on General Hospital. She eventually located Jason and Britt at one of the Corinthos safe houses. But Sam was in for quite a surprise when Jason told her to go back home. Even worse, Jason told her that Britt wouldn’t be going anywhere. Circumstances have changed in Port Charles now, with Cyrus about to go back to prison.

General Hospital spoilers hint Sam might very well declare that she is ready to reunite with Jason. Sam will be confident that their many years together will trump anything that has happened between Jason and Britt. But Sam may have pushed Jason away one time too many, as he certainly seems to have feelings for Britt. Jason will have to decide what he wants and it will most likely be Dr. Britt Westbourne!

While it was one thing to be romantic while on the run, do Jason and Britt have strong enough feelings for one another to begin a relationship now that they are home? Will Carly continues to maintain her current positive feelings toward Britt, or will she try to reunite Jason and Sam? And will Sam declare that it’s safe for her and Jason to be together now that Cyrus is going to jail? Will Britt be left with fond memories or will Jason decide he wants to be with her?

Surprise romances make big waves in Port Charles so stay tuned to General Hospital airing weekdays on ABC. And don’t forget to check back right here regularly for all your General Hospital news, information, and spoilers!