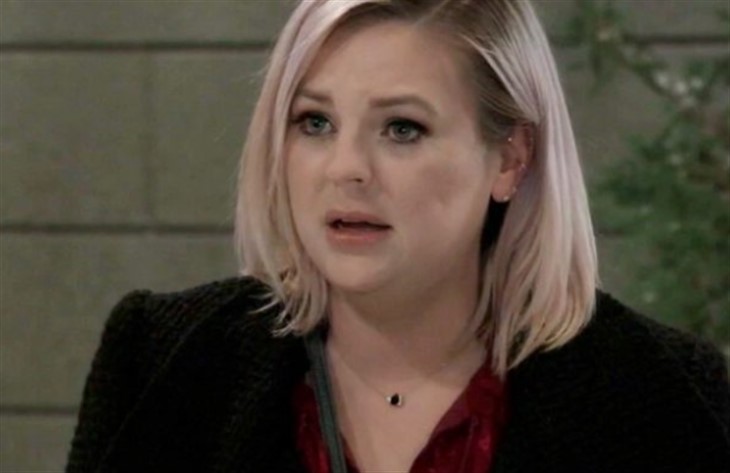 General Hospital (GH) spoilers for Tuesday, June 1, 2021, reveal Maxie in the woods with a very large newborn and Cyrus looking for a doctor to help him — in her own home.

Brook manages to track Maxie (Kirsten Storms) and her baby down in the woods and Maxie relays everything that happened between the crazy nurse with the crowbar and the strange man in the woods who delivered her baby (and looks just like Franco Baldwin, although Maxie didn’t seem to notice). Do they go back and find the doctor who calls himself Austin (Roger Howarth) and see if he’s ok?

Meanwhile, back in Mainland Port Charles, Anna (Finola Hughes) is searching for that antidote and has to sweet talk Peter (Wes Ramsey) once again. He knows exactly what she wants and hisses that he may give it to her and maybe he won’t, but he will have Maxie and his baby with him, yes he will.

Back at General Hospital, Chase’s (Josh Swickard) condition becomes worse and Willow (Katelyn MacMullen) confronts Finn (Michael Easton), asking if there is something he’s not telling her about her ex’s condition. Finn is not sure what to say and blames himself.

Later, Elizabeth (Rebecca Herbst) tells someone that Peter is not allowed to take anything else from them. Is that someone Chase or Cameron (Will Lipton) and are the hours almost up so we can see how Peter took his tumble?

Portia (Brooke Kerr) is shocked to come home and find a wounded Cyrus (Jeff Kober) in her home. He is shot and needs help and she might have to remove a bullet under duress just as Britt had to when she saved Jason’s life a few short weeks ago.

Speaking of removing bullets, one was removed from Gladys (Bonnie Burroughs), but nobody is saying if she made it or not. Brando (Johnny Wactor) is anxious to see his mother but is he about to get the news he doesn’t want to hear? Did Cyrus manage to kill someone? Stay tuned to General Hospital weekdays to see how these stories play out.