General Hospital (GH) Spoilers: Britt And Jason Return To PC, Sam Tries To Break Them Up? 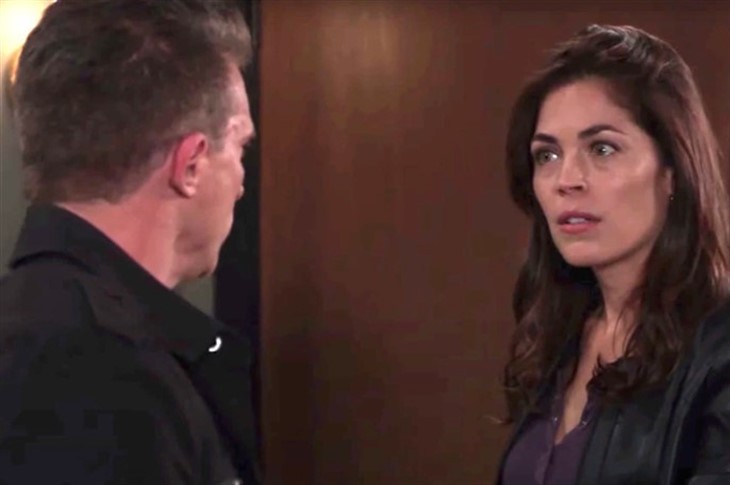 General Hospital (GH) spoilers tease that Sam McCall (Kelly Monaco) was shocked when Jason Morgan (Steve Burton) didn’t send Dr. Britt Westbourne (Kelly Thiebaud) packing when Sam arrived at Jason’s current hiding spot. Instead, as per Sam’s wish to stay to keep her kids safe from the danger that comes from Jason’s career as Sonny Corinthos’ (Maurice Bernard) and now Carly Corinthos’ (Laura Wright) enforcer.  The explosion at the Floating Rib was a wake up call for Sam so she made the difficult choice to break things off with Jason.

While Sam was in prison for killing Shiloh Archer (Coby Ryan McLaughlin) she cried to anyone who would listen that she missed his kids. Finally, Sam received parole far earlier than expected. But since Jason was a known felon, as per Sam’s parole officer made it clear that Sam would go back to prison for violating parole if she went back to Jason or even saw him for anything other than something regarding the care of their children. But Sam wasn’t content to be paroled, she literally tried to blackmail her parole officer to let her see Jason. Suddenly, she was willing to risk going back to prison in order to be with Jason.

Eventually, Sam made a deal with Valentin Cassadine (James Patrick Stuart). Valentin would be able to temporarily vote for Sam’s children’s ELQ shares and in return, Sam got a new Parole Officer who would allow Sam to see Jason. Jason moved back into the home he shared with Sam, and it looked like things were finally going to work out for the couple.

Fearing that drug lord Cyrus Renault (Jeff Kober) would target their children to get at Jason, Sam broke things off with Jason almost as soon as he moved in. Suddenly, Sam was once again not willing to risk her kid’s lives if she stayed with Jason. But it isn’t easy for Sam to stay away from Jason, and when he went on the run with Britt Westbourne, Sam was once again ready to accompany Jason, and even suggested that Britt leave. But it was Sam that Jason asked to leave.

And as they grew closer every, Britt and Jason have made love and will likely remain a couple once Jason is exonerated. Will Sam accept Jason’s new romance or will she insist that she belongs with Jason? Will she accept Britt and Jason’s romance. or will Sam once again change her mind and decide that she will be with Jason despite the risks. But the problem is that Sam waiting too long, and Jason has moved on. Britt isn’t just a substitute for Sam, Jason actually has feelings for her and Sam will have to accept that.

General Hospital Spoilers – How will Port Charles react when Jason and Britt come back to Port Charles as a couple? Will Sam refuse to believe that Britt is anything more than a fling or will she face the truth that Jason has finally moved on and that Britt isn’t going anywhere! Some people can’t seem to decide who and what they really want in Port Charles, so stay tuned to General Hospital airing weekdays on ABC. And don’t forget to check back regularly for all your General Hospital news, information, and spoilers!

Days Of Our Lives (DOOL) Spoilers: Gabi Gets A Shocker – Allie Has A Visitor