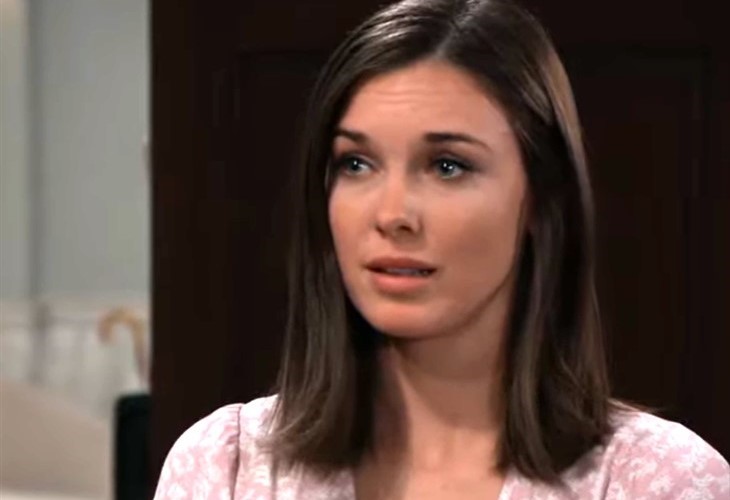 General Hospital (GH) spoilers for Tuesday, December 7, 2021, reveal Willow not knowing what to do when she stumbles on a piece of shocking information.

Willow Tait (Katelyn MacMullen) seems to always have a secret. She came onto the Port Charles scene that she was the birth mother of the dead baby Nelle Benson (Chloe Lanier) tried to pass off as Jonah — and Willow didn’t even know that secret.

She also kept the secret that she was in a cult and the man that fathered her baby was really cult leader Shiloh (Coby Ryan McLaughlin). Then, there was the secret that she was in love with Michael Corinthos (Chad Duell) after marrying Harrison Chase (Josh Swickard) only because he was allegedly dying. Now, she knows that Sonny Corinthos (Maurice Benard) and Nina Reeves (Cynthia Watros) were more than just friends in Nixon Falls and she doesn’t know what to do.

She knows she heard too much so she quietly walks away from the hospital chapel but looks really distracted when Carly Corinthos (Laura Wright) and Michael find her. Will she blurt out what she heard, sending Carly on a warpath like never before?

The maniacal cartoon villain Peter August (Wes Ramsey) is hissingly happy to see someone and we can bet that someone is Maxie Jones (Kirsten Storms), who asks Anna Devane (Finola Hughes( to bend the rules for her. Peter says he knew she couldn’t stay away and that must mean Maxie, the object of his obsession. But why would Maxie even want to see this man and torture herself this way? It’s bad enough that the audience is tortured by him on a daily basis.

Esme Prince (Avery Pohl) and Trina Robinson (Sydney Mikayla) have some words over at Kelly’s where Esme makes it a point to warn Trina not to get any ideas about Spencer Cassadine (Nicholas Chavez). Spencer is her man and she has no intention of letting him go.

Meanwhile, Spencer and Josslyn Jacks (Eden McCoy) meet up at the boxing gym where Joss gives her old childhood pal her blunt thoughts on his choice of girlfriend. Stay tuned to General Hospital weekdays to see how these stories play out.