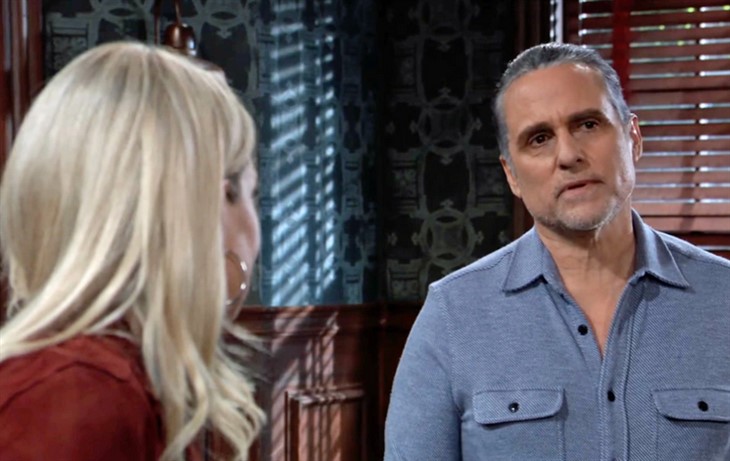 General Hospital (GH) spoilers for Tuesday, August 31, 2021, reveal Nina and Sonny having their first date. Of course, Sonny still thinks his name is Mike and Nina is not about to tell him otherwise.

The Tan-O is empty and this time it’s because the bar is actually closed. Phyllis is getting comfort from a friend and Nina (Cynthia Watros) and Sonny (Maurice Benard) are left all alone. So, Sonny asks Nina on their first official date and things are about to get serious.

Will Nina shy away again as the guilt gets the best of her or will she just go for it with this man with no memories who she has fallen for? When Sonny starts questioning her, she wants to know why.

Meanwhile, it looks like Sonny’s spaghetti sauce is getting a workout in Port Charles when Trina (Sydney Mikayla) comes up with a meal idea and helps Josslyn (Eden McCoy) cook a surprise dinner for Jax (Ingo Rademacher). Will Joss realize that the sauce is awfully familiar and inform her mother?

Speaking of her mother, Carly (Laura Wright) and Jason (Steve Burton) are worried about what could go wrong next and believe Cyrus Renault might be working with the Five Families.

The search for Hayden (Rebecca Budig), her shooter, and Drew (Cameron Mathison) all seem to be related as Sam (Kelly Monaco) and Dante (Dominic Zamprogna) are on both cases. Plus, Shawn was aiming for Drew when his bullet never made it but another bullet made it into Hayden’s head via Nikolas’s hitman. Since we are supposed to pretend Sam doesn’t know that, she and Dante do more digging on Tuesday and wonder if the information they have is accurate.

Elsewhere, Jordan (Briana Nicole Henry) and Shawn (Sean Blakemore) discuss his quest to find the shooter and Shawn is hesitant when Jordan wants to help. Jordan wonders if Shawn trusts her. Well, she barely can manage to solve any PCPD case without outside help.

Finally, Finn (Michael Easton) and Elizabeth (Rebecca Herbst) finally embark on their camping trip with their respective children and Violet (Jophielle Love) looks frightened and sad. Will comforting the little girl bring them closer together? Stay tuned to General Hospital weekdays to find out.