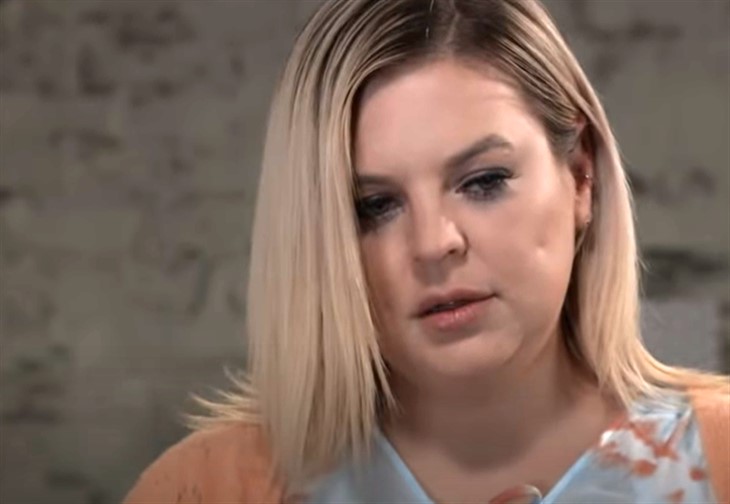 General Hospital (GH) spoilers for Thursday, May 27, 2021, reveal Maxie possibly giving birth on the side of the road once again.

So, Maxie (Kirsten Storms) is on the side of the road ready to have a baby. Why does this sound so familiar? That was how she had her last baby and Peter (Wes Ramsey) was there to deliver him. Peter knows where his evil little nurse was taking Maxie. Does he find her on the side of the road and have to deliver another baby, a baby he plans to take off with while also kidnapping her mother because he’s nuts?

Or is Maxie rescued by someone else? Perhaps she gets lucky and is somehow not far from where Jason (Steve Burton) and Britt (Kelly Thiebaud) are hiding out. Britt was supposed to deliver the baby anyway, so this would be convenient. All we know is that a few hours later, Peter is going to go down those hospital stairs so hopefully he isn’t there with his new baby.

Things are not going Peter’s way. His nurse lost Maxie and now Valentin (James Patrick Stuart) is after him. For some reason, Peter is at the Q mansion and he must be making creepy, hissing threats. Valentin warns him that if he starts messing with his daughter, he will kill him.

Peter better believed him because Valentin has had his number for years and is absolutely sick of having to be his good Samaritan.

Carly (Laura Wright) always thinks she will get the upper hand with Cyrus (Jeff Kober), but this time he manages to turn things around and is holding Spinelli (Bradford Anderson) hostage. When Carly realizes what’s going on, she panics. But she wants to go it alone.

It’s Ava (Maura West) who offers her help and Carly’s pride gets in the way of her immediately saying yes, but at this point, Carly has to cave.

Meanwhile, Jason is distracted and has no idea what’s happening with his two pals because he is way too into Britt. He tells her to hear him out and that he’s not going to abandon her. Stay tuned to General Hospital weekdays to see how these stories play out.