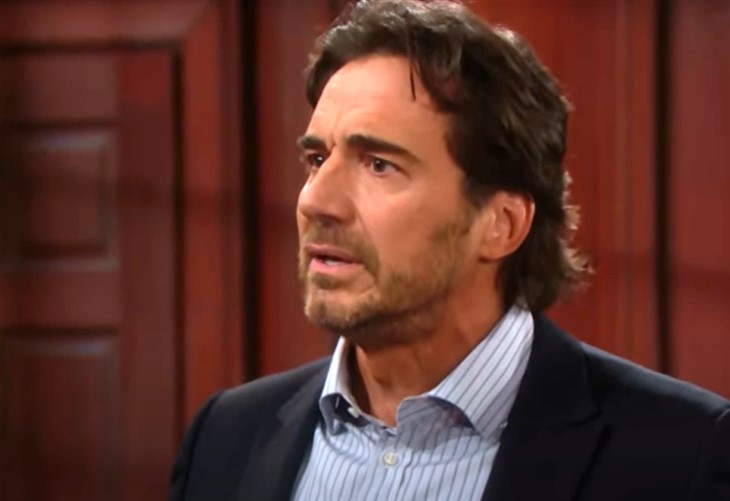 The Bold and the Beautiful (B&B) spoilers reveal Carter in the hot seat when Ridge gets understandably curious.

The Bold And The Beautiful Spoilers – Ridge Forrester Needs to Know

Carter (Lawrence Saint-Victor) slept with Shauna? Ridge (Thorsten Kaye) can hardly believe it (and with good reason). Sure, he may have fallen for Shauna’s (Denise Richards) charms, but he is Ridge and he tends to do things like that. Shauna certainly didn’t seem like Carter’s type.

So, Ridge just has to know and goes to Carter for information. How did it happen? Are you sure it’s over? Carter is put in the hot seat over an affair he didn’t even have. He had a different affair and if that one ever came out, his entire life would change.

What will Carter tell Ridge? An affair with Shauna is hard to swallow and Carter is not a very good liar. He especially doesn’t like keeping secrets from a friend like Ridge.

It looks like Hope (Annika Noelle) and Liam (Scott Clifton) are definitely in this together. They have quite a secret themselves and now they have to figure out what to do with it. Bill (Don Diamont) begged them to keep the truth about Vinny’s (Joe LoCicero) death to themselves. He wants to save Liam but he also wants to save himself because Bill always wants to save himself. It’s why he placed a passed-out Liam in the passenger seat and drove away from the scene of a crime.

However, Liam doesn’t think he can do it anymore. He feels better about unburdening himself to Hope and is grateful she still wants to be with him after learning he killed a man and fled the scene of the accident, but Hope is forgiving that way. The pair makes a pact that whatever they decide, the decision will be made together.

So, Bill’s fate is in Liam and Hope’s hands, but so is Liam’s. He doesn’t want to go to jail either. They told Bill they’d take 24 hours to decide what to do and these are likely the longest 24 hours of Dollar Bill’s sad, narcissistic life. Stay tuned to The Bold and the Beautiful weekdays to see how this story plays out.

CW Announces The Return Of Scooby-Doo Reunion And The Waltons