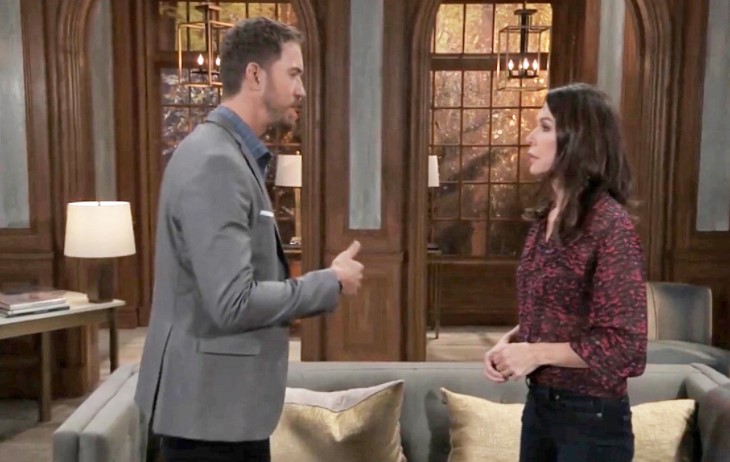 General Hospital (GH) spoilers tease that Anna Devane (Finola Hughes) will grow suspicious of Peter August’s (Wes Ramsey) actions when she sees him sneaking around GH in an upcoming episode of General Hospital!

General Hospital viewers will remember that Peter and Cyrus Renault (Jeff Kober) are working together, and Cyrus is the head of General Hospital. As far as Anna knows at this point, Maxie Jones’ (Kirsten Storms) plan has worked perfectly and she is in Beecher’s Corners with Bobbie Spencer (Jacklyn Zeman) delivering her baby, and Maxie and her baby will be safe from Peter. However, she sees him sneaking around General Hospital as she is there to get an update from Dr. Hamilton Finn (Michael Easton) about if he has made any progress on synthesizing an antidote. Finn wasn’t sure if a blood sample from Harrison Chase (Josh Swickard) so long after being given a dose of the antidote would yield any usable results as far as the antidote’s components, but he had decided to try.

Perhaps reverse engineering would be successful. That is how he was able to develop a cure for Blackwoods’ Syndrome from his bearded dragon, Roxie’s blood. While there, Anna is alarmed and grows suspicious of what Peter is up to as she, unseen by Peter, overhears a phone call he is making. It sounds like he is giving someone instructions – she hears him tell someone to check back in with him when “it’s done”! When Anna hears that, her suspicions are aroused as she knows there is a plan afoot on Peter’s part with an accomplice, and that plan is going to spell danger for someone because of how dangerous Peter himself is!

General Hospital viewers know that Anna is not going to just let what she just overheard go! Anna decides she’s going to tail Peter to see where he goes and what he does next. She gives Finn a quick call to give him a heads up and she also checks in with Valentin Cassadine (James Patrick Stuart), who as General Hospital viewers know, is working with Anna to take down Peter. She tells both Valentin and Finn what she heard and tells them both that she is going to tail Peter. Even an experienced WSB spy should not be without backup, but Finn is in the hospital right now so he is keeping his eyes open for Peter also as he studies Chase’s blood sample.

He hopes it will give him the answers he is looking for since although the compounds in the antidote break down quickly, they break down when exposed to the air, and this way they were not exposed to the air. Finn didn’t want to withdraw it back out of the IV line on a subsequent dose, as Chase needs every drop of it. Anna observes as Peter, with unfettered access to any part of the hospital that Renault has obviously given him enters the hospital pharmacy! Now she wonders if the toxin and the antidote are coming not from Peter’s own manufacture, but from Cyrus Renault and funneled through General Hospital! She observes Peter coming out with several vials that look like the ones with the antidote. She thinks she’s onto something and calls Finn immediately. As far as the other plan she overheard Peter on the phone about, Valentin’s already on that.