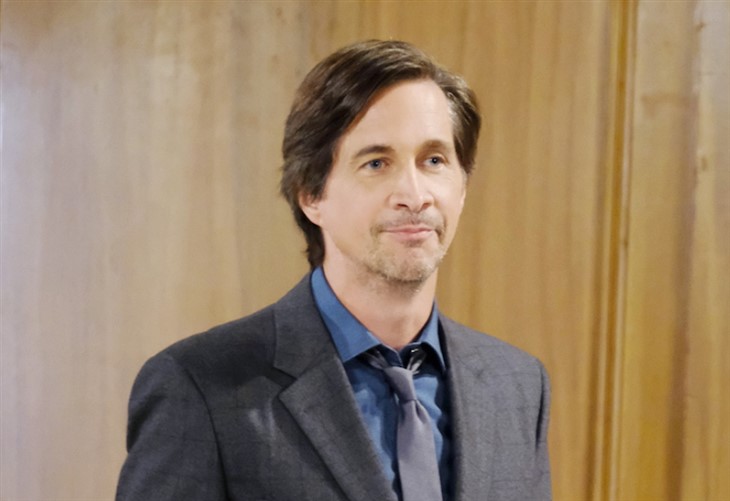 General Hospital spoilers for Thursday, June 17, 2021, reveal a light going off in Finn’s head that may save Chase. But will he be married to Willow by then?

It took Cyrus (Jeff Kober) speaking some cannily-crafted words as he went off in an elevator leading him to federal prison for Finn (Michael Easton) to realize why his miracle cure just made Chase (Josh Swickard) worse. It was all in the DNA and Finn’s discovery that he was Chase’s father — or maybe that was a false discovery. Maybe he is still Chase’s brother like they all originally thought for decades.

That would mean they need Gregory’s (Gregory Harrison) DNA to concoct a cure for Chase and Finn is ready to secure it. Just swab dad and the job is done. Meanwhile, thinking he won’t make it through the night, Chase pressures Willow (Katelyn MacMullen) into getting someone to officially marry them right away. Will she already be a blushing bride again by the time Finn appears with his big news?

GH Spoilers – Up On The Roof

Meanwhile, Elizabeth (Rebecca Herbst) is trying to make sure that Finn doesn’t go to jail for murder. She knows Anna (Finola Hughes) is up there on that hospital roof nosing around so Liz goes up there too, in order to make sure she doesn’t make her way down that supposedly out-of-order elevator.

Still, Anna wants to know everything about where the elevator leads and what is down in that old lab. Elizabeth can’t and won’t give her a straight answer, but she does tell her she hopes she finds some closure regarding Peter (Wes Ramsey).

Carly (Laura Wright) never likes it when Jason (Steve Burton) has any interest in anybody other than her. It took her years to get rid of that pesky Sam (Kelly Monaco) and now she has to deal with Britt (Kelly Thiebaud). How tedious. To that end, she confronts Britt and asks her what she expects from Jason. Britt can usually hold her own and might just put Carly in her place, which could be a nice change.

Jason also gets the third degree — from Britt’s mother. Liesl (Kathleen Gati) wants to know what Jason’s intentions are towards her daughter. And so do we. What will Jason say? Stay tuned to General Hospital weekdays to see how these stories play out.