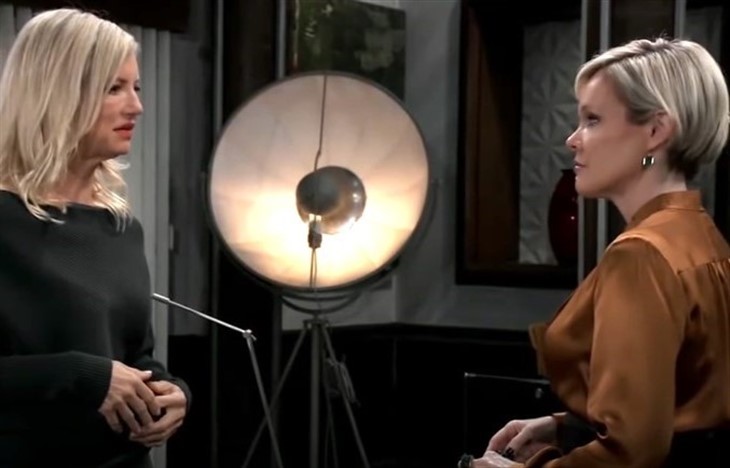 General Hospital (GH) spoilers tease that Ava Cassadine (Maura West) will catch up with Nina Reeves (Cynthia Watros) in an upcoming episode of General Hospital. Ava will pick up that Nina’s hiding something, and she’ll be suspicious about what Nina is hiding!

General Hospital viewers will recall that since Nina went to Nixon Falls, Pennsylvania to spend some time with Phyllis Caulfield (Joyce Guy) she’s been hiding a sneaky secret! She arrived to her old friend and former nurse and husband Lenny Caulfield’s (Rif Hutton) place of business, The Tan-O Bar, to find an amnesiac and presumed dead Sonny Corinthos (Maurice Benard) working there under the name “Mike”!

Nina, obviously was taken aback – and she was going to tell Carly Corinthos (Laura Wright) that she’d found her husband alive, but as General Hospital viewers will remember, Carly was so mean to her she decided to keep Sonny’s survival a secret! Nina has had a couple of close calls or so since she’s come back to Port Charles already. She has been catching up with friends in addition to having had a wonderful visit with her grandson, Wiley Corinthos (Erik and Theodore Olson) that her ex-boyfriend, Jasper “Jax” Jacks (Ingo Rademacher) had “arranged” by blackmailing Michael Corinthos (Chad Duell)!

Jax had threatened to tell Harrison Chase (Josh Swickard) that he saw Michael and Willow Tait (Katelyn MacMullen) making love on the couch in the gatehouse through the window! That is ten times more egregious than anything Valentin Cassadine (James Patrick Stuart) ever did when Nina and he were together! But then, Nina keeping Sonny a secret could be considered a bit egregious as well – especially considering that they are falling in love with Nina knowing who he is!

GH Spoilers – Ava Cassadine And Nina Reeves Have Lunch Together

More than likely, Ava and Nina will have lunch or drinks at the restaurant in the Metro Court, since Ava likes their dirty martinis and she, her husband Nikolas Cassadine (Marcus Coloma), and Avery Jerome-Corinthos (Ava and Grace Scarola) have moved there. General Hospital viewers will recall that after the last “gift” they received from the mysterious stalker, Dante Falconeri (Dominic Zamprogna) advised they move off Spoon Island for their own safety.

Plus, Nina’s Crimson Magazine office is upstairs and she may want to check in there while in Port Charles as well. As Ava and Nina talk, Ava notices Nina is rather evasive when it comes to certain topics of discussion. As Maxie Jones (Kirsten Storms) also wanted to know in a recent episode of General Hospital, Ava wants to know what the big attraction in Nixon Falls is! Nina is not a very good liar – she cannot control her body language and the looks on her face, and Ava picks up on her holding back right away. Maxie already figured out that the mysterious “Mike” holds a great deal of interest of Nina’s and teased her about her liking “Mike”.

It is a good thing that Nina has not so far made the mistake of using a photo of “Mike” in conjunction with his phone number, because if anyone in Port Charles saw her phone ring, the jig would be up! Ava, like Maxie, starts asking questions and Ava knows Nina is hiding something although she won’t say what it is. However, as when she was with Maxie, “Mike” calls again and Ava becomes suspicious as to who he is, but even more so as to who he is to Nina!