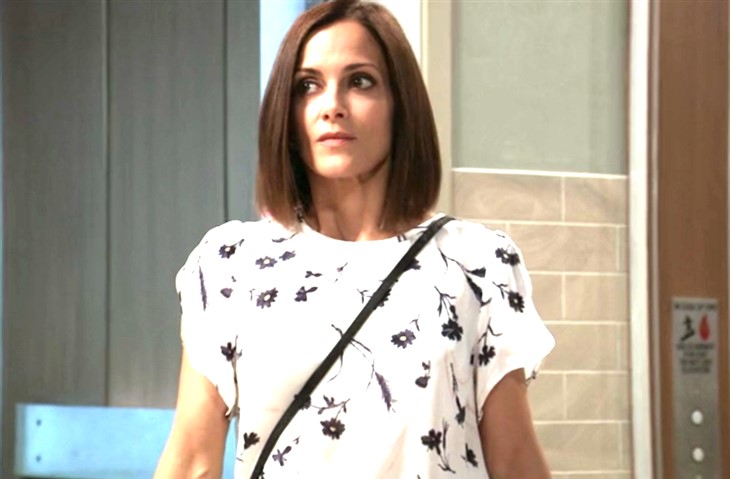 General Hospital spoilers for Thursday, July 29, 2021, reveal much of Port Charles having something to say about Hayden Barnes.

Sam (Kelly Monaco) is all in on helping Shawn (Sean Blakemore) find the person who ordered the hit on Hayden back in 2015 when in 2016 she learned it was Nikolas and even blackmailed him about it. But Sam must have Sonny’s (Maurice Benard) amnesia because she breaks bread with Nikolas (Marcus Coloma) on Thursday and tells him she’s searching for Hayden (Rebecca Budig) because she thinks Hayden knows who it was. She is right about that. But she also knows although we’re supposed to pretend she doesn’t know.

Nikolas, who apparently forgot that Sam got him to give back his ELQ shares or she’d tell everyone he ordered the hit on Hayden, tells her not to go looking for the woman because it will only bring trouble.

Meanwhile, Elizabeth (Rebecca Herbst), who also knows that Nikolas had her sister shot, calls someone mysterious and tells them that they need to talk about Hayden.

GH Spoilers – The Case of the Missing Popsicle Peter August

Dante (Dominic Zamprogna) really wants to know what’s going on with Anna (Finola Hughes) and confronts her. Something is not right here and since he has better cop instincts than Jordan (Briana Nicole Henry), he’s the one that questions Anna.

He’s especially intrigued after he sees Anna and Valentin (James Patrick Stuart) talking. Valentin had already figured out Finn (Michael Easton) was on the roof with Peter, but he has yet to learn Finn believed he killed the man. So, Anna is at the Quartermaine with both Dante and Valentin wanting all the answers.

Elizabeth must have a lot on her mind. Between Peter’s missing body and talk of Hayden, what more can she take? How about an unexpected surprise from Cameron (Will Lipton) and Joss (Eden McCoy)? They most likely tell her they’re dating and we’re not sure why this should be a surprise.

Then there’s Trina (Sydney Mikayla) who has a request for Spencer (Nicholas Chavez). Throw a party at Wyndemere and invite her. The teens invading Wyndemere could get interesting… Stay tuned to General Hospital weekdays to see how these stories play out.