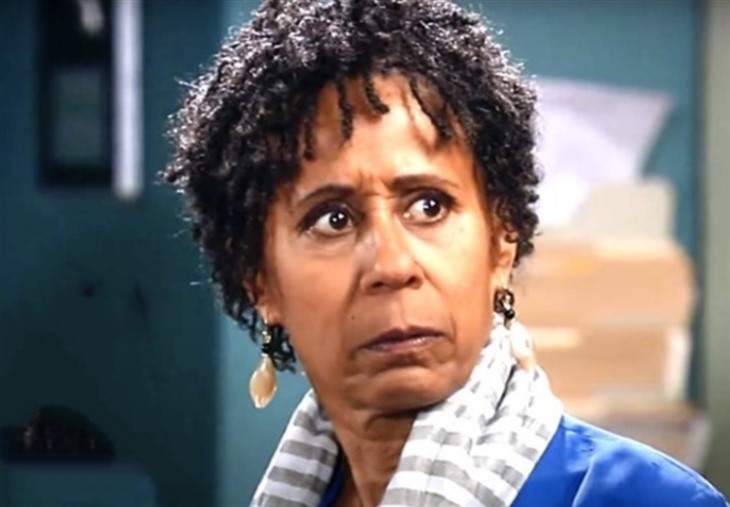 General Hospital (GH) spoilers for Thursday, August 5, 2021, reveal that in Port Charles, NY Aunt Stella’s (Vernee Watson) life is in danger after she collapses on the floor at Kelly’s Diner.

General Hospital Spoilers – Can Cameron Webber Save The Day?

As soon as Curtis (Donnell Turner) warned Stella not to stress and allow her blood pressure to go up, we could see what was coming. Stella was so frantic and guilt-ridden after accidentally exposing Portia (Brook Kerr) and Curtis’s affair to Trina (Sydney Mikayla) that she could barely catch her breath. She confessed all to her nephew and explained she didn’t want him throwing away love.

Curtis left to smooth things over with Trina and Portia and as Stella got up to leave, she passed out. On Thursday, she’s rushed to General Hospital where Curtis wonders if it’s his fault that his Auntie is in such grave condition. He also thanks Cameron (Will Lipton) for getting her medical care quickly, but is it too late?

Meanwhile, when TJ (Tajh Bellow) sees Stella brought in, his emotions take over and he loses his professionalism. Will it cost the new doctor his job?

Brando (Johnny Wactor) and Jason meet up at the boxing gym, which is where Cameron also ends up after getting Stella to the hospital. As Jason (Steve Burton) gives Cam some pointers, Brando wants to have a talk with the hitman.

After Brando made it clear that he wanted to keep working for the Corinthos Crime Family, he now tells Jason that he changed his mind and Jason is perplexed. Why would anyone ever leave such a fantastic job? Well, Brando has a baby on the way with Sasha and Sasha would prefer not to raise a baby with a mobster baby daddy. Can Jason try to understand how she feels or is this just too foreign to him?

Everybody gets to do a little something on Thursday as Jax (Ingo Rademacher) and Carly (Laura Wright) have it out after Carly puts Josslyn’s life in danger once again.

Over at the hospital, Terry (Cassandra James) tries to be nice to Britt (Kelly Thiebaud) and apologizes for past animosity but Britt isn’t having it, telling Terry that she shouldn’t think an apology would ever make her want to share the chief of staff job with her.

Finally, Sasha (Sofia Mattsson) and Brook Lynn (Amanda Setton) meet up at the Metro Court where Sasha tells Brook she has a career proposition for her. Stay tuned to General Hospital weekdays to see how these stories play out.