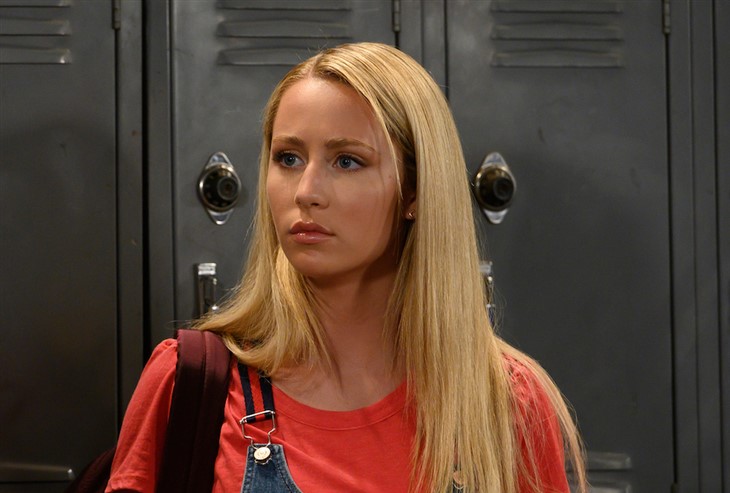 General Hospital (GH) spoilers tease that Josslyn Jacks (Eden McCoy) may be about to meet someone who can make sure forget all about her issues with Cameron Webber (William Lipton). As viewers know, Josslyn and Cameron shared a kiss several months ago at a school dance. They were interrupted by a jealous Dev Corbin (Ashton Arbab) who after months of waffling, decided that he was interested in Josslyn.

In order to create friction between Joss and Cameron, Dev stole Josslyn’s diary that she recently just stopped writing in and forced an entry about Cameron and their kiss. Dev wrote that Josslyn felt the kiss was awkward and their was nothing romantic about it. Dev showed a reluctant Cameron the entry and although he was angry that Dev invaded her privacy, he saw no reason to pursue anything further with Joss.

Dev did feel guilty and was planning to tell Cameron about his deception when he was unfortunately caught in the explosion at the Floating Rib. Dev died before he could tell Cameron the truth. To make matters worse, Cameron’s step-father Franco Baldwin (Roger Howarth) was murdered and Cameron believed Jason Morgan (Steve Burton) committed the crime.

To be fair, there was plenty of evidence against Jason, and the police arrested him as well. But Josslyn was angry that Cameron believed the evidence and blamed Jason for the crime. Eventually the truth came out, but Josslyn has said that maybe Cameron isn’t the person she thought he was. It seems doubtful that these two will even be friends in the near future, let alone have a romance.

GH Spoilers – Josslyn Jacks Is About To Start Physical Therapy!

Perhaps it is time for both Josslyn and Cameron to move on. Cameron and Trina do still have feelings for one another that they should probably explore. But what about Josslyn? Recently, Josslyn hurt her ankle playing volleyball and since volleyball will be a major part of her college career, she is going to need to take care of it. She will need to have physical therapy over the summer to get back into fighting shape for her first semester at Port Charles University. It seems likely that sparks will fly between Josslyn and her new PT, even though they may be at odds at first. As the summer goes on, look for a possible romance between Joss and her new PT!

Are Cameron and Josslyn still hoping for a romance? Or did Dev’s deception and Cameron’s distrust of Jason end all possibility of a future for these two? Should Trina and Cameron explore their own feelings for one another? And could Joss’ new Physical Therapist make her forget all about Cam? Young love is ever changing in Port Charles so stay tuned to General Hospital airing weekdays on ABC. And don’t forget to check back right here regularly for all your General Hospital news, information and spoilers!