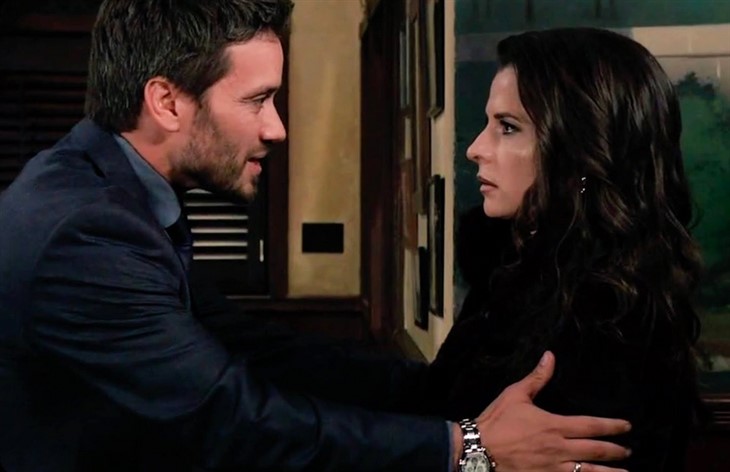 General Hospital (GH) spoilers tease that both Sam McCall (Kelly Monaco) and Dante Falconeri (Dominic Zomprogna) are not likely looking for romance at this point in their lives. They have both recently had to become separated from the person that each thought was their soulmate.

1But does that alone mean that these two lost souls could or should start something with one another? That remains to be seen, but these two have been circling each other for weeks now, culminating in a kiss on the 4th of July just as the fireworks went off.

Sam and Jason Morgan (Steve Burton) thought they were the love of each others’ lives. They had even gotten married. But their lives were changed forever when Jason was shot and plummeted into the harbor. He was presumed dead for several years and then one day Drew Cain (Billy Miller) showed up and was though to be Jason, with plastic surgery changing his facial features.

Sam and Drew picked up where Sam and Jason left off on General Hospital. But fate threw another wrench into their lives when the real Jason arrived. Sam eventually declared her love for the real Jason, but ever since his return Jason and Sam were never actually able to connect in the same way. But Sam eventually cut things off between them when Jason’s mob connections threatened the life of Sam’s kids. But that doesn’t mean she stopped loving him. But Jason has moved on, and now is poised to marry Carly Corinthos (Laura Wright).

But it was soon apparent that something had changed with Dante. He realized that he had been brainwashed while undercover and to protect Lulu and their children, Dante went to a WSB facility in order to remove the programming. He sent Lulu divorce papers but finally came home. With Sam’s assistance, he realized his programming was still intact and with the assistance of Dr. Kevin Collins (Jon Lindstrom), the programming was finally removed. But a reunion with Lulu was impossible because she was caught in an explosion at the Floating Rib and has been comatose ever since.

General Hospital Spoilers – Both Dante Falconeri And Samantha McCall Have A Lot Of baggage!

Over time, Dante and Sam have had a contentious, but flirtatious relationship form between them. Neither of them really trust the other, but it’s obvious there is an attraction. But is a relationship a good idea. Sam, although she declared her independence from Jason, most likely still has residual feelings for the mobster. And Dante and Lulu certainly have unresolved issues.

But Jason has moved on and Lulu may never recover so perhaps they can finally move on with each other. They did kiss during the fireworks, but Sam immediately pulled back, clearly upset. It may a long road to romance, but the potential is certainly there.

Should Sam and Dante act on their attraction? Or will Jason or Lulu come back into their lives? How should they proceed, if at all? Love on the rebound can sometimes turn into the real thing in Port Charles so stay tuned to General Hospital airing weekdays on ABC. And don’t forget to check back right here regularly for all your General Hospital news, information and spoilers!