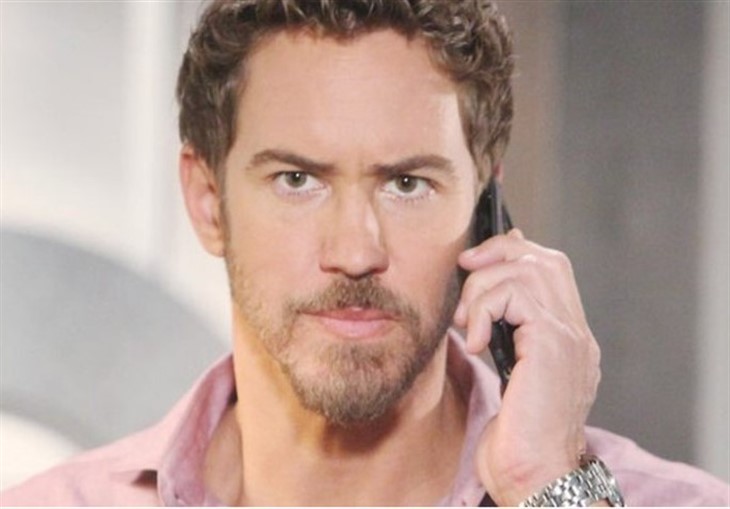 General Hospital (GH) spoilers tease that in Port Charles, NY Peter August (Wes Ramsey) will soon publish a disconcerting article; what General Hospital fans want to know is if it is one that will rankle Cyrus Renault (Jeff Kober)!

General Hospital viewers will remember that Lulu Spencer (Emme Rylan) was working on an exposé of Cyrus Renault and had called in Jackie Templeton (Kim Delaney) to help before the explosion of The Floating Rib. Peter had turned it down but only because Lulu’s allegations were unproven, and she needed more proof to back up her story. That was where Jackie was going to come in. However, the explosion, which took place while Jackie had to go out of town, put a delay on those plans.

But now that Jackie is back, that exposé may have come back into play! Jackie certainly gets around with her investigations – one has to wonder just what kind of provable facts that she was able to dig up on Cyrus Renault that Peter August would have given the go-ahead on and decided to publish in The Invader! But then, Peter has some contacts of his own that might have some intel – General Hospital viewers will remember he has called upon them to do some pretty untoward things himself.

Peter called upon those old DVX contacts and associates of his late father, Cesar Faison (Anders Hove) and the late Helena Cassadine (Constance Towers) when he ran into problems with Drew Cain (Billy Miller) and Liesl Obrecht (Kathleen Gati)! Could it be that those contacts have some provable dirt on Renault and Peter edited it into the exposé himself?

Gh Spoilers – Is The Pen Mightier Than The Sword-Or Should That Be The Gun?

Cyrus has quite the network of henchmen – and there are enough of them that they are all over the United States, as proven by the coordinated attacks on Sonny Corinthos (Maurice Benard) and his businesses, family and associates that started about a year ago. Peter’s contacts, for the most part are overseas – in Greece, in Switzerland and other areas. The DVX always has had more of a presence in Europe than it has in the United States. Those contacts are powerful and dangerous, but they are apt to go rogue, as Peter quickly found out when he wanted Holly Sutton (Emma Samms) kidnapped a few months ago and even he was told she was killed. General Hospital viewers know she is being held hostage in an unknown location, but no one else except her captors know.

Peter also has contacts in the United States, although not quite as many as he does back in Europe. Someone likely took over Cassandra Pierce’s (Jessica Tuck) drug producers and routes after Valentin Cassadine (James Patrick Stuart) presumably blew her up in a dinghy after she kidnapped his daughter last year; could it have been Cyrus? It seems that Peter and Cyrus may be on an even playing field as far as contacts and associates and possibly even henchmen. Will the pen prove to be mightier than the sword, or in this case the gun? Will the article Peter publishes rankle Cyrus because he has enemies who will come out of the woodwork because of the publicity? Time will tell!