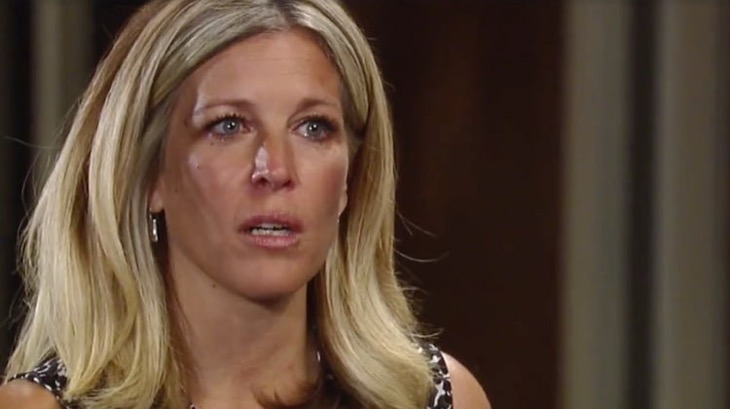 General Hospital (GH) spoilers and updates reveal in Port Charles, NY Carly Corinthos’ (Laura Wright) instincts are screaming to her that Sonny Corinthos (Maurice Benard) is alive. However, the police have called off the search and Sonny has no memory of his life. Will Carly follow her instincts and go look for her husband?

General Hospital – No One Has Recognized Sonny Corinthos

General Hospital’s Sonny has been found and treated for his injuries. Phyllis Caulfield (Juliette Jeffers) has checked with the local authorities but no one seems to be looking for Sonny. To complicate things further, Sonny has no identification except for Mike Corbin’s (ex-Max Gail) watch. Sonny has named himself Mike after reading the back of the watch. Sonny really isn’t wrong choosing Mike as his name, his given name is Michael. However, Sonny doesn’t go by his given name and hasn’t for years. Could Sonny eventually remember that Mike is his father and not his name?

General Hospital’s Carly has a sixth sense when it comes to Sonny. Carly has traveled hundreds of miles to get to Sonny when he has been hurt and would do it again. It isn’t safe for Carly to be out searching for Sonny but Jason has to run the business. Carly cannot ignore the pull to search for Sonny and bring her husband home. Will Carly travel back to New Jersey and do what the police could not? Could Carly stumble into the Lenny Caulfield’s (Rif Hutton) bar and back into Sonny’s arms? Would Sonny recognize Carly if she did find him?

General Hospital’s Sonny is in grave danger until he remembers who he is. Sonny could also bring one of the five families down on Lenny and Phyllis as well. Cyrus Renault (Jeff Kober) is now looking for his mother which could lead him to find Sonny as well. After all, Carly had his mother stolen and stashed in a safe house. Curtis Ashford (Donnell Turner) is searching for Cyrus’ mother as well. If Curtis or Laura Collins (Genie Frances) discover the safe house, it could lead them to the part of town where Sonny is staying. Cyrus wouldn’t think twice about holding Sonny hostage or even killing him. Cyrus has already taken out one of the five families workers that had come into Port Charles to try and run their product through the docks.

General Hospital’s Carly needs to get to Sonny before Cyrus and his men stumble upon him. Will Carly follow her instincts and save Sonny?