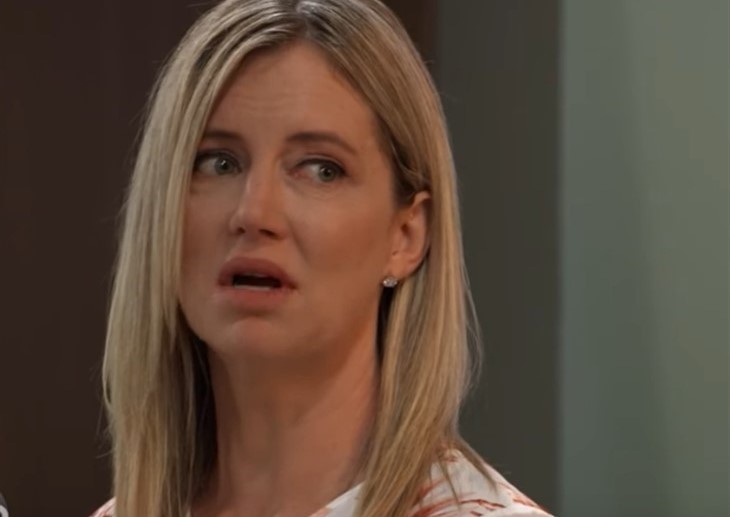 General Hospital (GH) spoilers and updates tease Nina Reeves (Cynthia Watros) has two secrets that she trying to keep. Nina knows that Sonny Corinthos (Maurice Benard) is still alive. Everyone in Port Charles believes that Sonny died after falling from a bridge in New Jersey. Nina knows that Sonny is living in Nixon Falls, Pennsylvania with amnesia. Nina knows that Maxie Jones (Kirsten Storms) gave her daughter Louise August (Harper and Scarlett Bloom) to Brook Lynn Quartermaine (Amanda Setton) to raise because she was concerned about Louise’s father Peter August (Wes Ramsey) being in her life. Nina does not know what to do about the secrets that she is keeping.

Nina will want to make sure that Maxie and Louise stay safe. Maxie believes that Peter would try to harm her or Louise because he had been committing different crimes. Nina knows that Maxie wants to be with Louise. Maxie has decided to go out of town to clear her head. Nina is concerned about Brook Lynn having Louise because she has passed Louise off as her own daughter Bailey Lois Quartermaine. Brook Lynn and Valentin Cassadine (James Patrick Stuart) had a one-night stand and Brook Lynn left Port Charles because she thought that she might be pregnant with Valentin’s child. However, Brook Lynn found out that she was not pregnant but came back to Port Charles pretending to be pregnant. Brook Lynn wanted to get her ELQ shares back from Valentin and believed that he would give them back to her in order to be a part of his child’s life. Nina cares about Valentin because they were in a relationship in the past. She knows that being a father is very important to him. Nina knows that Valentin believes that he is Bailey’s father. Nina will know that Valentin will be devastated to find out that Bailey is not his daughter.

Nina believes that Sonny has found a new and better life in Nixon Falls. Sonny ran his mafia organization in Port Charles. Sonny has been able to leave his criminal past behind because he cannot remember his past. Nina has found out that Sonny’s wife Carly Corinthos (Laura Wright) is planning on marrying Jason Morgan (Steve Burton). Nina may believe that Carly has found a way to move on from Sonny with Jason. Nina and Sonny have gotten close because she had been living in Nixon Falls for a short time before returning to Port Charles to visit with her grandson Wiley Quartermaine-Corinthos (Eric and Theodore Olson). Sonny wants Nina to come back to Nixon Falls. He is concerned about Phyllis Caulfield (Joyce Guy) and her husband Lenny Caulfield (Rif Hutton). Sonny and Nina have gotten to be good friends to Phyllis and Lenny while they have been in Nixon Falls. Lenny is having medical problems and Sonny wants Nina to come back to help him to support Lenny and Phyllis.

General Hospital Nina will need to figure out what to do about the two secrets that she is keeping. Nina wants Maxie and Louise to be safe. However, she can see that Maxie wants to be able to be with Louise. Will Nina help Maxie to get Louise back? Nina will not want Valentin to be hurt when he finds out that Louise is not his daughter. Can Nina help Valentin to deal with finding out that the daughter that he loves is not his own? Nina is worried about Sonny, Phyllis, and Lenny. Will Nina return to Nixon Falls to help Phyllis and Lenny? Nina wants the best for Sonny. Will Nina help Sonny remember who he is? She has come to care about him. Nina may believe that Sonny will be upset that Carly has moved on with Jason. Will Nina decide that Sonny does not need to return to Port Charles because Carly is getting married to Jason? Sonny wants to have a relationship with Nina. Will Nina decide to get into a real relationship with Sonny if she goes back to Nixon Falls? Be sure to catch up on everything happening with GH right now. Come back here often for General Hospital spoilers, news, and updates.

What Happened To Zende And Nicole On The Bold And The Beautiful?