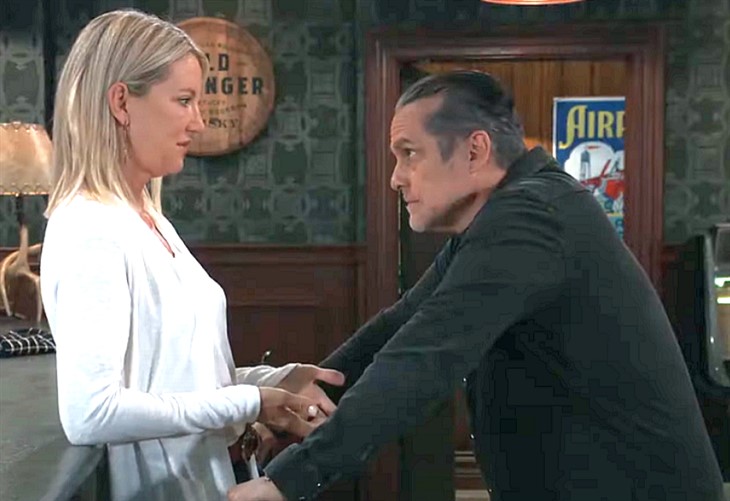 General Hospital spoilers reveal ‘Mike’ wanting to surprise Nina (Cynthia Watros) in Port Charles, which is going to lead to a whole lot of trouble for Nina as the truth about ‘Mike’s’ identity is sure to come out. Although he has no memory of who he is, Sonny has managed to fall for Nina and vice versa, but when Sonny (Maurice Benard) gets his memory back all of that can change. Should Sonny forgive Nina for her lies — or at least for omitting the truth? You tell us!

When Sonny gets his memory back, he will not only have to deal with the fact that Carly (Laura Wright) and Jason (Steve Burton) developed a marriage scheme thinking he was dead, but also have to deal with the fact that the blonde woman he met in Nixon Falls has known his true identity all along. How can she keep a truth like that from him when she knew he had a life and a family in Port Charles?

Sonny is a man known for his temper and for wanting to always feel like he is in charge. Having no memory made him feel helpless as he just tried to deal with an existence that felt comfortable to him, but not real. We can see his temper exploding when he learns all Nina did was lie to him from the first moment she walked into the Tan-O.

When Nina first spotted Sonny alive and in a bar on the Pennsylvania side of the river, she had every intention of telling Carly to come fetch her husband. But Carly was so very Carly on the phone that Nina hung up without ever revealing the truth. She then justified her lies by telling herself that Sonny was happy in his new life as a bartender who had nothing to do with the mob or killing people for a living. She’s been doing Sonny a favor in her mind.

Plus, she’s fallen for him and that easy way of life in Nixon Falls and wants that for herself — and the man she calls Mike. She knows she’s wrong, but should Sonny understand where she was coming from after his own experience over the last six months and forgive her or should he never forgive her at all? Let us know in the General Hospital poll below.

The Young And The Restless (Y&R) Spoilers: Will Phyllis Bring Down Tara Locke – Sharon Surprised