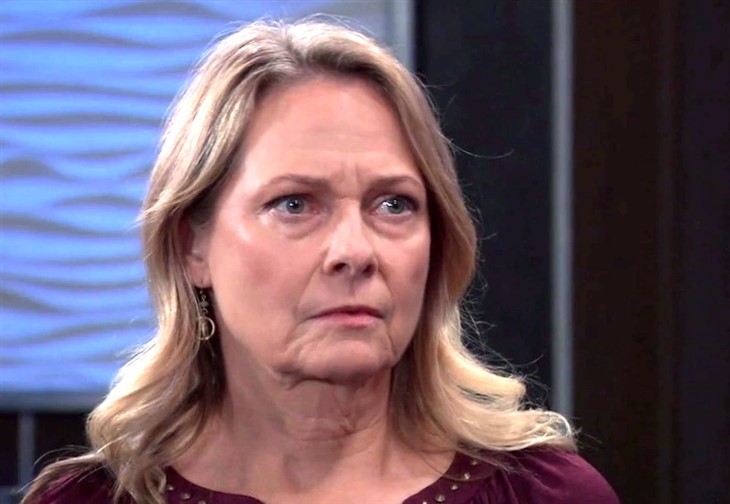 Austin Holt (Roger Howarth) knew that Gladys (Bonnie Burroughs) had to have some Quartermaine “intel” that would hurt Brook Lynn (Amanda Setton). He hates the woman so much that it was like an instinct. So, he led her straight to Valentin Cassadine’s (James Patrick Stuart) room where she cooed over him and debated how to break the news that baby Bailey Louise is not his daughter after all. (Little does she know Brook Lynn is not the mother.)

When Brook learns where Gladys is, she knows she has to stop the woman and will offer her anything she wants to keep her mouth shut.

Meanwhile, Austin is getting more curious by the moment why Maxie Jones (Kirsten Storms) is so involved with the Quartermaines and wants to know what her connection to Valentin is. He may be about to put all the pieces together….

It looks like Shawn Butler (Sean Blakemore) telling Spencer Cassadine (Nicholas Chavez) that Nikolas (Marcus Coloma) had Hayden Barnes (Rebecca Budig) shot in the head back in 2015 was a way to get Nikolas to just admit to his crime already. Nikolas and Spencer have an ugly confrontation about what he did and Shawn and Spinelli (Bradford Anderson) are in a van listening to the whole thing. How much damage will this do or will Nikolas play it cool and completely lie? Does this also mean Alexis isn’t getting out of Hotel Jail any time soon?

We finally learn what happened to Liesl Obrecht (Kathleen Gati) and Drew Cain (Billy Miller) when Liesl awakens in a lab to find the mustache-twirling most hated character on GH, Peter August (Wes Ramsey), standing over her. What is he up to now and will anyone come to her rescue?

Well, Jason Morgan (Steve Burton) and Britt Westbourne (Kelly Thiebaud) sure are trying and know they’re close, but will they be too late if Liesl bends to Peter’s will? It seems he wants her to help him with his Drew mind control mission. Stay tuned to General Hospital weekdays to see how these stories play out.