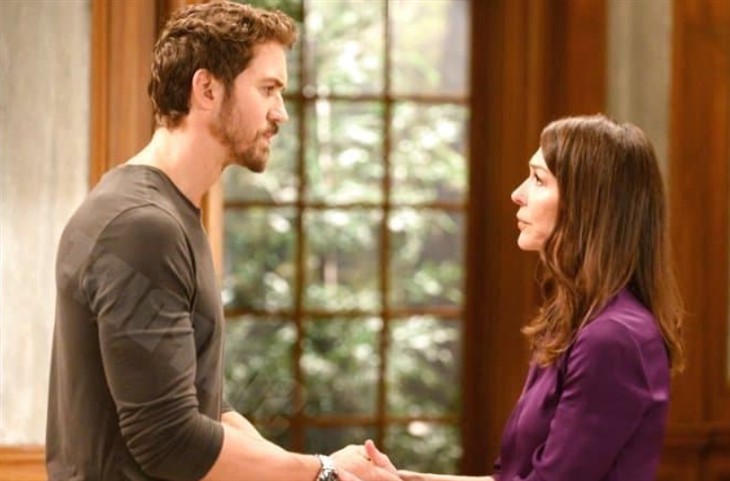 General Hospital (GH) spoilers for Monday, May 17, 2021, reveal Anna realizing she has to do something about Peter once and for all.

Finn (Michael Easton) has just about had it knowing that Peter (Wes Ramsey) is responsible for both Franco’s (Roger Howarth) death and Chase’s (Josh Swickard) condition and nobody is doing anything about it. He takes out his frustrations on Anna and Ms. Devane finally realizes she can’t wait much longer. Peter needs to be taken care of.

To that end, she makes a call to an old friend from the WSB whom she is sure can help. However, she’s about to get quite the shock she never expected. Will she get the help she needs or ends up on a surprise project?

Meanwhile, Peter and Maxie (Kirsten Storms) decide she should not be induced right then and there. That ruins Peter’s plan to plant a fake nurse in the delivery room and Maxie’s plan to fake the baby’s death. As the two dance circles around one another, Britt (Kelly Thiebaud) gets further away and Maxie falls more and more for Peter’s tricks.

General Hospital (GH) Spoilers: Peter Toys With Anna As Chase Get Sicker – What Will He Want Next? @SoapOperaSpy https://t.co/N5oB4mdseX

Brook Lynn (Amanda Setton) is likely relieved that Valentin (James Patrick Stuart) didn’t ask to be in the delivery room but she certainly doesn’t want him moving into the Quartermaine mansion to keep an eye on her. Besides, she needs to get to Beecher’s Corner and get the house ready for Maxie’s baby. She has no time for Valentin but has to get rid of him somehow? What is her next on-the-fly plan?

It also seems that Port Charles and GH need yet another pregnancy so Sasha (Sofia Mattsson) does her best to get rid of Brando (Johnny Wactor) so he doesn’t find out she is carrying his child.

Over on the Pennsylvania side of the river in Nixon Falls, Sonny (Maurice Benard) does his best to hide what he did and Nina (Cynthia Watros) does her best to protect Sonny. But the mobster who doesn’t know he’s a mobster breaks out a gun so it looks like something is about to go wrong. Stay tuned to General Hospital weekdays to see how these stories play out.

Days Of Our Lives (DOOL) Spoilers: Gabi And Jake At Long Last