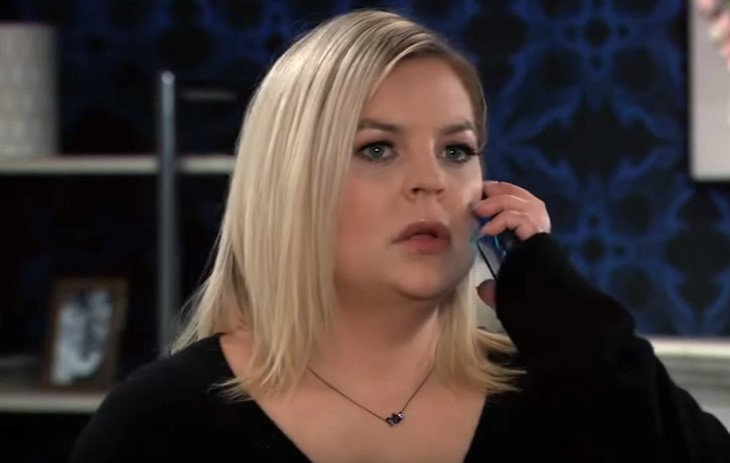 General Hospital (GH) spoilers for Monday, June 21, 2021, reveal in Port Charles, NY Maxie willing to risk anything to see her baby as she panics that Dante managed to stumble onto the truth.

Dante (Dominic Zamprogna) arrives back from his little excursion with Austin (Roger Howarth) and has news for Maxie (Kirsten Storms). He thinks he found a clue as to what happened to her baby. Might that clue be a body? If Crazy Nurse Chloe (Kimberly J. Brown) really did die, you’d think she’d be down in that hole Dante was in. Once Maxie learns what Dante found, she feels more desperate than ever and tries to get to Louise but that’s not going to be as easy as she thinks.

Valentin (James Patrick Stuart) is quite attached to this child and Brook Lynn (Amanda Setton) finds time to tell Anna (Finola Hughes) that she has never seen this side of Valentin. This doesn’t bode well for Maxie and Brook coming out of this scam unscathed.

GH Spoilers – The Race To Save Harrison Chase

Finn (Michael Easton) now knows he can make a serum to save Chase (Josh Swickard), who is now his brother again the way everything was supposed to be. Now life makes so much more sense and it looks like, despite Finn calling a Code Blue, he is able to bring Chase back to life.

General Hospital spoilers say that things get more complicated for Michael (Chad Duell) and Willow (Katelyn MacMullen) and we’re sure that complication is likely a living and breathing Chase. They didn’t count on this when Willow said ‘I Do?’. We guess their plans are foiled.

Meanwhile, Elizabeth (Rebecca Herbst) must be relieved because she runs into Jason (Steve Burton) and has a thing or two to say about Phttps://twitter.com/SoapOperaSpy/status/1405890562830573570eter (Wes Ramsey). Does she have the guts to tell him what really happened?

Carly (Laura Wright) can’t for the life of her imagine why Jax (Ingo Rademacher) still insists that Josslyn (Eden McCoy) come to live with him but Joss knows. She is aware that her father doesn’t believe Carly will leave the dangerous side of the mob to Jason.

When Joss gets away from her whining mother, she and Cam (Will Lipton) have a talk and he apologizes to her for how he treated Jason. Will they be able to go back to the way things were between them? Stay tuned to General Hospital weekdays to see how these stories play out.

Bold And The Beautiful (B&B) Spoilers: Liam Tries To Get Hope And Thomas Together?