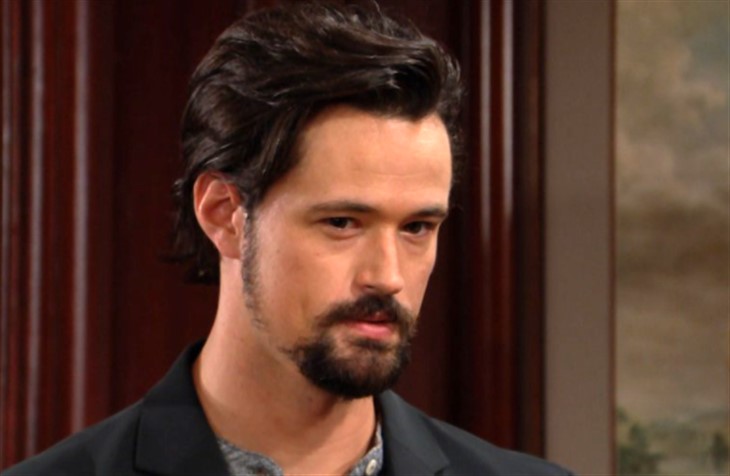 The Bold and the Beautiful spoilers reveal that during the week of June 21, Thomas Forrester (Matthew Atkinson) gets alarming information. As fans recall, he blocked Vincent “Vinny” Walker (Joe LoCicero) from his phone. Well, Thomas finally reads all those unseen text messages. He learns the truth about Vinny’s death, but it ends with Thomas being held hostage.

The Bold And The Beautiful Spoilers -Blocking Vinny Walker

Next week, Thomas will start going through all those blocked texts and make a horrifying realization. Vinny must have known someone was after him and might have been pleading with Thomas for help. Even though Thomas has a tense confrontation with Liam Spencer (Scott Clifton), he now believes he is innocent. He told Hope Logan Spencer (Annika Noelle) and Ridge Forrester (Thorsten Kaye) that Liam isn’t capable of murder. So, when Thomas starts reading Vinny’s old text messages, he will go searching for the truth.

The Bold And The Beautiful Spoilers – Thomas Forrester Held Hostage

The Bold and the Beautiful spoilers state that Thomas’s search will land him in a dangerous situation. It is confirmed that Justin Barber (Aaron D. Spears) holds Thomas hostage. Now, fans are wondering what the deal with this is. Did Justin kill Vinny because of the paternity test? Was his goal to frame Bill Spencer (Don Diamont) to gain control over Spencer Publications? Remember, when Bill was shot, Justin was about to be handed the company.

It is stated that Thomas is horrified by Justin’s plans. So, we have to wonder if Justin plans on killing him. Maybe he threatens Thomas’ loved ones, such as Hope or Douglas Forrester (Henry Joseph Samiri) in order to keep him quiet. It’s possible that Justin might not have killed Vinny, but knows who did. Or, he simply used the arrest to get what he feels he’s entitled to after all his years of saving Bill’s behind.

Even though it is a family business, it would not automatically go to his family unless it’s stated in legal paperwork. The only other possibility is if Bill never made that clear in legal documents and a judge decided where it would go. Now, most businesses explicitly state what they want to happen with their business if they die, become incapacitated, or can no longer run it… as in a prison sentence. It’s irresponsible and rare for a successful business to not have things like this well-documented. Especially if the owner’s right-hand man is a lawyer.

The Bold And The Beautiful Spoilers: Affair Exposed – Who Will Brokenhearted Zoe Go After Firsthttps://t.co/rKqtaApF99

The Bold And The Beautiful Spoilers – All About Spencer Publications?

Now, there is a possibility that Justin has drafted up fake paperwork with Bill’s signature to make sure he gets Spencer Publications. Perhaps Bill was foolish enough to sign documents without really reading them. Maybe Justin forged Bill’s signature. We are thinking this is the most likely possibility because Bill is still alive… and would be able to tell a judge he wants the company to go to his children.

Plus, Bill’s sister owns half of Spencer Publications the last time we heard. So, the only way around it going to her is if Justin makes sure it doesn’t by drafting phony legal documents. Could this be what this is all about? Or is Justin just covering his tracks? Perhaps Vinny was working for Justin and he’s a secret L.A. drug kingpin. We will have to keep watching the CBS soap to find out what Justin’s goal is and what happens to Thomas.