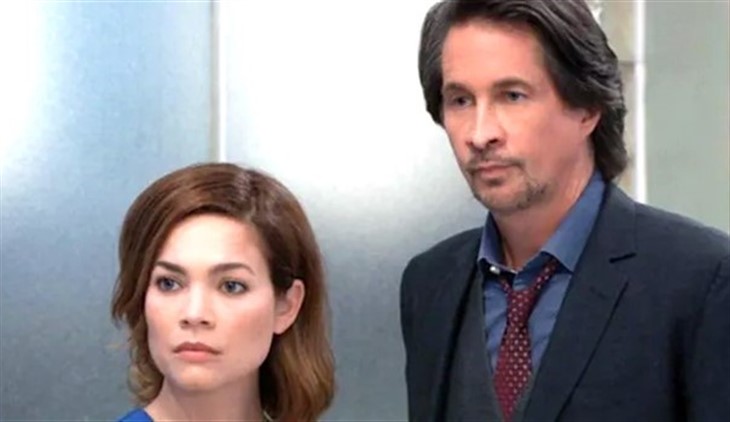 Anna (Finola Hughes) confronts Finn (Michael Easton) with her suspicions that he was the one on the roof with Peter (Wes Ramsey) that fateful day he disappeared and Finn can’t keep it a secret any longer. Yes, he fought with Peter August and pushed him down a flight of steps to his death. Anna is shocked but not shocked and also horrified but not horrified.

Meanwhile, Elizabeth (Rebecca Herbst) tells Jason the same story, but adds in the part about the body in the GH freezer and asks Jason to help her and Finn move it. Jason is glad to help because this is what he does for a living after all. Will they find Popsicle Peter when they get to where they stash the body or will there be a big surprise in store?

GH Spoilers – Nikolas Cassadine Tries To Save Himself

As we pretend that half the town doesn’t know that Nikolas (Marcus Coloma) is the one who had Hayden (Rebecca Budig) shot in 2015, Nikolas pays a visit to his cousin in prison to see how far she got with helping Shawn (Sean Blakemore) investigate. Does he also discover Ryan (Jon Lindstrom) is in this prison and looks perfectly catatonic and unable to stalk him and Ava (Maura West)?

Elsewhere, Shawn continues searching for clues, so he goes to Jax (Ingo Rademacher) and asks him if he knows anything about Hayden’s most recent disappearance and his current whereabouts. Perhaps this is something he should be asking Nikolas about since he is the one who tricked her into leaving town and leaving her daughter behind. Also, does all this talk of Hayden mean her return may be imminent?

Britt (Kelly Thiebaud) still fears for her job — and it’s a job that Terry (Cassandra James) wants. Monica (Leslie Charleson) calls both women into her office and tells them she’s made a decision on who will be chief of staff. If Bitt loses her job, will Terry fire her from the hospital altogether? If Britt keeps her job, will she and Terry now become mortal enemies? Stay tuned to General Hospital weekdays to see how these stories play out.