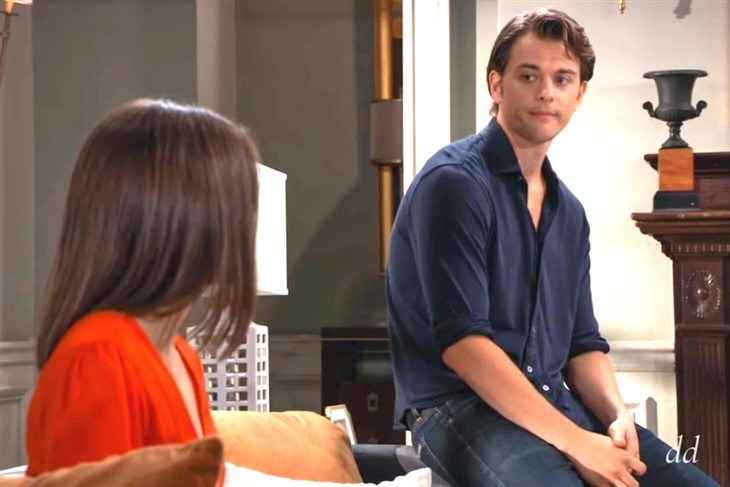 General Hospital (GH) spoilers reveal in Port Charles, NY Chase continuing to progress with his walking skills but he has to explain his choice to keep it a secret from Willow.

It turns out Chase (Josh Swickard) isn’t telling Willow (Katelyn MacMullen) he can stand on his own because he wants to keep her. No, he wants to present himself on his own two feet in a romantic way as a grand gesture telling her he can be her husband in every way now. That is what he essentially tells Austin (Roger Howarth) when the new Quartermaine in town questions him on why he is not telling his loving wife the news.

Austin agrees to keep things a secret, but can Chase really trust Austin? The audience already knows Austin was the one trolling around the Q grounds soon after Maxie’s (Kirsten Storms) baby was born and spotted Willow and Michael doing the deed in the carriage house. He knows exactly what Willow has been up to and seems to have a vendetta against Michael.

Chase is oh-so-very grateful to Austin for agreeing to keep his secret, but when Chase needs to get to the gatehouse, he needs help with the wheelchair and Austin decides to take him there at just the right time. Of course, Michael (Chad Duell) and Willow are in a compromising position, but will this be another near miss like all the near misses with seeing that Sonny is alive, or will Chase really learn Michael and Willow have been duping him all along out of pity?

And what will Chase do with this information if he does indeed learn Willow is not as wonderful as he thought she was? Will he then decide to keep things a secret in order to hold onto Willow or will he do the altruistic thing and let Willow and Michael be together. Frankly, they deserve one another after lying to Chase and maybe he will actually feel that way, too. This will make Michael and Willow happy, but where will Chase go from here? Is there a new love interest on the horizon or will he continue to keep his improving condition a secret? Stay tuned to General Hospital weekdays to see how this story plays out.