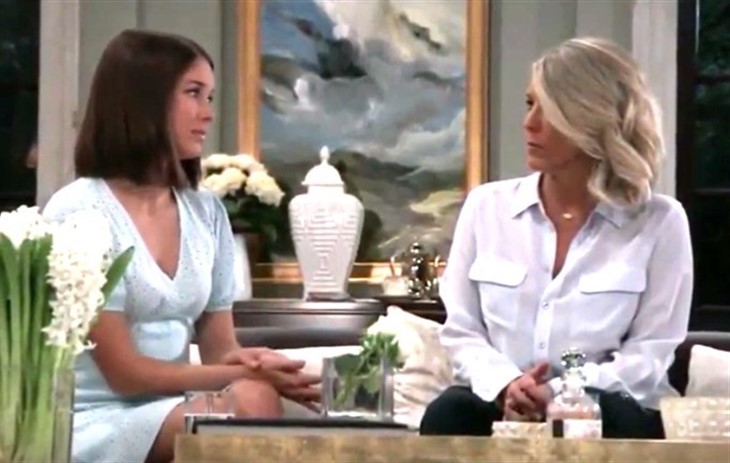 General Hospital (GH) spoilers reveal that in Port Charles, NY Carly Corinthos (Laura Wright) could be a mean girl and blow the lid off the Willow Chase’s (Katelyn MacMullen) pity marriage to Harrison Chase (Josh Swickard). Carly has a big mouth, and if she thinks it benefits her prized son Michael Corinthos (Chad Duell), she will not hesitate to tell the truth.

Right now her son is pining away for a woman who is staying strong for a man she doesn’t love, out of a sense of duty and responsibility. But with firecracker Carly in the picture, things could change in an instant. Is a Millow reunion an August Sweeps certainty?

Explosive show spoilers reveal that mama Corinthos sees Michael and Willow in a tender moment and wants to know what Hades is going on since Willow is supposed to be happily married to Chase. The truth is, she only married him because she, and everyone else, thought he was going to die.

The poor schmuck lived, and for that, he is rewarded with a sympathy bride?! This can’t end well.

Right now Carly is dealing with her own relationship woes and this could greatly influence how she handles any truth that surfaces about Millow. Her hubby Sonny Corinthos (Maurice Benard) is presumed dead and she is about to marry his (and her) best friend Jason Morgan (Steve Bruton).

But alas, this is also a marriage of deceit. They are marrying to save Sonny’s mob empire, but fans suspect much more will transpire once they say their I do’s. After all, there has been heated between them in the past and as they grieve the loss of Sonny, while they are in close proximity to each other, it could be enough to turn the ignition switch.

If Carly gets wind of the deceit going down on her watch, she won’t hesitate to act even though she has been hypocritically deceitful plenty of times all on her own.

But a big reveal from her about Willow could backfire and turn Michael against her. He wants what’s best for Chase and he has a history of not tolerating his mom’s shenanigans. If Carly blows the lid, could she also lose access to her grandson Wiley, further driving her into Jason’s perfectly toned muscle-bound arms?

Five Facts About Days Of Our Lives Star Eric Martsolf