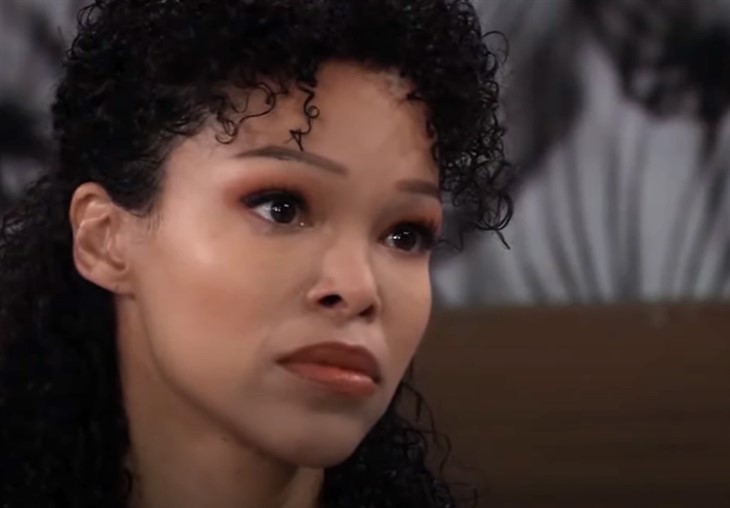 General Hospital (GH) spoilers tease that Marcus Taggert (Réal Andrews) knows that Portia Robinson (Brook Kerr) cheated on him, as revealed in the General Hospital sneak peek for Monday, April 12. The big question is, has he known for years, or did his “roommate” and former DEA partner Jordan Ashford (Briana Nicole Henry) tell him?

General Hospital viewers will recall that Curtis Ashford (Donnell Turner) and Portia had an affair in the past, it was revealed in General Hospital episodes when Portia Robinson first started working at General Hospital and Curtis ran into her for the first time. She had been in Port Charles for quite some time, as her daughter Trina Robinson (Sydney Mikayla) had been hanging out with Cameron Webber, (William Lipton) Josslyn Jacks (Eden McCoy) and Josslyn’s late boyfriend Oscar Nero (Garren Lake Stitt), and later with Cam, Joss, and Dev Cerci (Ashton Arbab) before he also sadly died.

No one knew a lot about her mother or that her father was Marcus Taggert until Jordan called him back to town when members of their old DEA (Drug Enforcement Agency) task force that framed Cyrus Renault (Jeff Kober) started dying of staged drug overdoses. Longtime General Hospital viewers will remember that Taggert was in Port Charles as a member of the Port Charles Police Department years ago, with an agenda to take down Sonny Corinthos (Maurice Benard) who he thought had killed his mentor, Officer Timothy Deacon “Deke” Woods (uncast character). Longtime General Hospital viewers will also remember that Deke Woods was Sonny’s abusive stepfather, although Taggert obviously must have had no clue about that side of Woods. Now, as a father, he would have understood Sonny’s hatred of Woods, although it was actually Sonny’s boss Joe Scully (Robert Miano) not Sonny himself who had killed him.

General Hospital viewers will remember that after Taggert was set free in court, Jordan brought him home to live with her – one reason was because as a condition of his release he needed to be monitored. Another reason, to be sure, was it allowed the ease that Taggert and Jordan need to continue to work on taking Cyrus Renault down. General Hospital viewers will recall that Curtis came by Jordan’s home, which had been the two of their home together until recently, and he may have wanted to talk to Jordan about working things out with her. But now, seeing Taggert there, he backed off and left. That was not unnoticed by Taggert, who brought it up in a post release hospital checkup performed by Portia in an examining room at General Hospital.

After talking about that awkward appearance by Curtis, Taggert revealed that he knew that Portia had cheated on him, and that he was pretty sure that it had been with Curtis! Portia appeared to be blindsided – and the big question that General Hospital viewers have, has Taggert known for years, or did Jordan tell him? Chances are, Jordan told him – because Curtis and Taggert didn’t appear to know each other when Taggert first came to town and they worked together to save Trina and Cameron from Renault’s men. This was when Taggert was shot and then faked his death. Taggert didn’t know Curtis but Curtis knew who Taggert was. That begs another question – why would Jordan tell Taggert that Portia had an affair with Curtis? Jordan knew – and she and Portia had even talked about it. Taggert, however, had a bad habit of sneaking around when he was supposed to be dead and in hiding! It’s possible he could have overheard something!