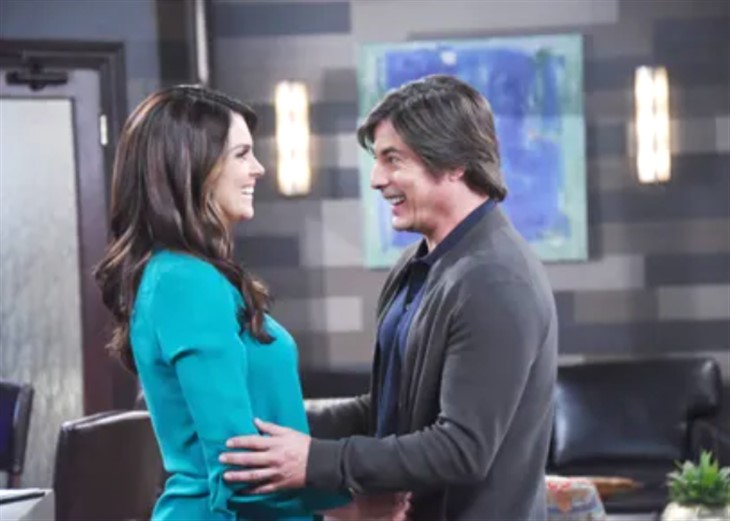 Days of Our Lives (DOOL) spoilers reveal that Lucas Horton (Bryan Dattilo) is pushed into deceiving Chloe Lane (Nadia Bjorlin). However, he isn’t the type of guy that messes with people’s minds or their hearts. Even though he wants to tell Chloe the truth, Lucas will continue to deceive Chloe. When the truth comes out, how will Lucas explain helping Kristen DiMera (Stacy Haiduk).

DOOL spoilers reveal that it isn’t Kristen who directly gets Lucas to go along with her plan. First, Sami and Kristen threaten each other with the other’s secret. Sami knows that Kristen is pretending to be Susan Banks. However, Kristen holds the upper hand. Sami will do anything to prevent EJ DiMera (formerly James Scott) from finding out she cheated on him. In the end, Sami is backed into a corner and agrees to Kristen’s terms. Then, Sami pushes Lucas into helping keep Kristen at bay.

Even though it is Sami that pushes Lucas into this scheme, it is ultimately because of Kristen. He feels conflicted about playing games with Chloe’s heart. He had the same thing done to him when Bonnie Lockhart pretended to be Adrienne Kiriakis (both played by Judi Evans). However, he will go along with the plan because that will keep Sami happy. As the actor explained to Soap Opera Digest, Lucas will do just about anything for Sami.

Days Of Our Lives Spoilers – Deceiving A Heartbroken Woman

Days of Our Lives spoilers reveal that it sounds like Chloe is fooled. Even though she has feelings for Brady Black (Eric Martsolf), she knows he still loves Kristen. She has also tried to tell him on multiple occasions but can’t seem to get the words out. Even though Kristen is responsible for all of this, Chloe thinks it’s just not meant to be. Plus, she wasn’t expecting Brady to suddenly push her away, which is a direct result of “Susan” telling Brady that Kristen was right all along.

Days of Our Lives (DOOL) Spoilers: How Far Will Gabi And Philip Go With Their Scheme? #DOOL #Days #DayOfOurLiveshttps://t.co/rg6ozpzsKE

Eventually, the truth will come out and Chloe will be furious. It’s not right to mess with someone’s mind or heart. Whether Lucas confesses the truth or Chloe finds out another way remains to be seen. However, it will cause a lot of angry tension between the two. It also might make others look at Lucas a bit differently. Even though he is a decent guy, Sami has once again roped him into something wrong. How will he explain why he felt forced to deceive Chloe? Will his one-night stand be exposed and will Kristen ever be caught? We will have to keep watching the NBC soap to find out.