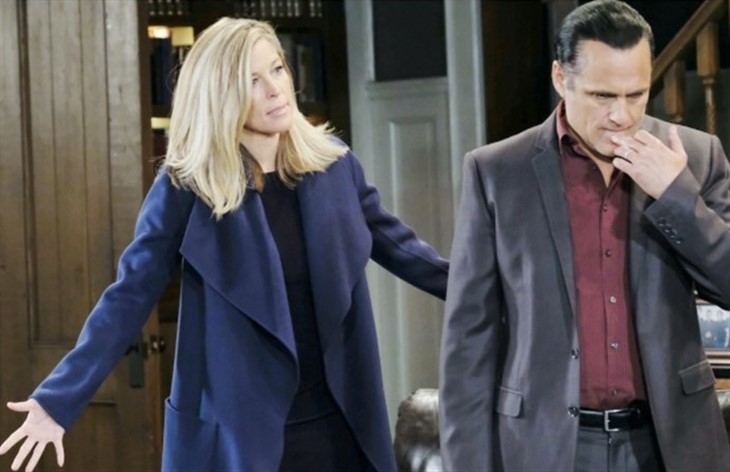 General Hospital (GH) spoilers for Friday, May 7, 2021, reveal Carly feeling the weight of the world on her shoulders and needing her not-so-dead husband more than ever.

Carly (Laura Wright) has had quite a week. She learned Jason (Steve Burton) was shot and was there for him to give blood at a makeshift surgery performed by Britt (Kelly Thiebaud). She then got herself all dressed up in her sexiest white dress and arrived for a meeting with the Five Families.

That’s where she got everyone to side with her and not Cyrus (Jeff Kober), enraging Cyrus, someone who gets angered very easily. After she learned Joss (Eden McCoy) hurt her ankle again and drove to Pennsylvania and Jax (Ingo Rademacher) was shot while in PA, Carly nearly lost it. On Friday, she might be losing it.

Sonny (Maurice Benard) shows up, but it only seems to be in Carly’s mind as she has a talk with him and explains everything she did. And she did it all to protect their family. Maybe a life of crime isn’t a way to do that.

Valentin (James Patrick Stuart) thought Anna (Finola Hughes) knew not to say a word about what Peter’s (Wes Ramsey) been up to but she couldn’t help herself and told Finn (Michael Easton) so he’d use that antidote on Chase (Josh Swickard).

On Friday, Anna confesses that she confided in Finn, and Valentin is floored. The more people who know Peter killed Franco, then the harder it will be to bring him down. He and Anna put their heads together to come up with another plan.

Meanwhile, Peter remains obsessed with Maxie (Kirsten Storms) and refuses to leave her alone. He shows up at her apartment when Brook Lynn (Amanda Setton) is there. Brook and Maxie were talking baby switch and now those plans might go awry sooner than they thought.

Now that Cameron (William Lipton) knows that Peter is the one who killed Franco and not Jason, he needs to apologize to Joss. Thankfully, she accepts his apology, but does he also tell her the truth about Peter August? Stay tuned to General Hospital weekdays to see how these stories play out.

The Bold And The Beautiful (B&B) Spoilers Friday, May 7: Shauna And Quinn Have A Plan