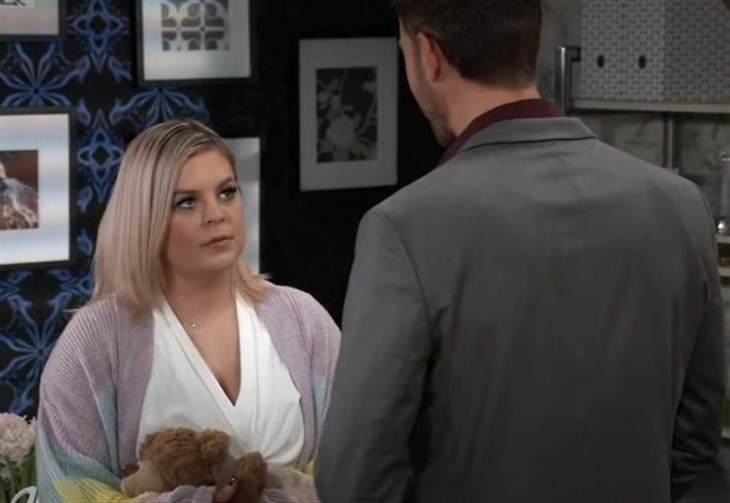 General Hospital (GH) Spoilers and rumors suggest that Maxie tries to appease Peter August (Wes Ramsey) and to keep him off her back. However, Maxie Jones (Kirsten Storms) is also trying to fake her baby’s death to keep her safe as well. Will Peter pay the nurse to spy for him?

General Hospital’s Maxie was in love with Peter. Everyone tried to warn Maxie against getting involved with him. However, Maxie chose to ignore all the warnings and ended up pregnant with his baby. Unfortunately for Maxie, she learned how evil Peter was way too late. Maxie almost married Peter but the truth came out at the wedding about Peter’s involvement in Drew Cain’s (ex-Billy Miller) death.

Now Maxie is trying everything possible to protect her child from Peter. General Hospital spoilers tease Maxie believes that faking her daughter’s death will cut all ties with Peter. Maxie has also agreed with Peter’s plan to have a private nurse help take care of her since Britt Westbourne (Kelly Thiebaud) has ordered her to avoid stress. Maxie may hire a nurse that she believes she can trust. Will her nurse betray her trust or will Brook Lynn Quartermaine (Amanda Setton)?

General Hospital’s Peter could be the one who betrays Maxie. Some GH spoilers and rumors have even suggested that Peter may kidnap Maxie or her daughter once she is born. Would Peter kidnap Maxie and hold her until her child is born? Could Peter take Maxie’s child because she isn’t giving him what she wants? Perhaps Peter even pays the nurse to induce labor and take Maxie’s daughter from her.

Peter cannot be trusted and Maxie is in a vulnerable state. Without Britt there to help, Peter could easily get the upper hand. Will Maxie lose the daughter she is trying so hard to protect?

Be sure to catch up on everything happening with GH right now. Come back here often for General Hospital spoilers, rumors, soap opera news, and updates.