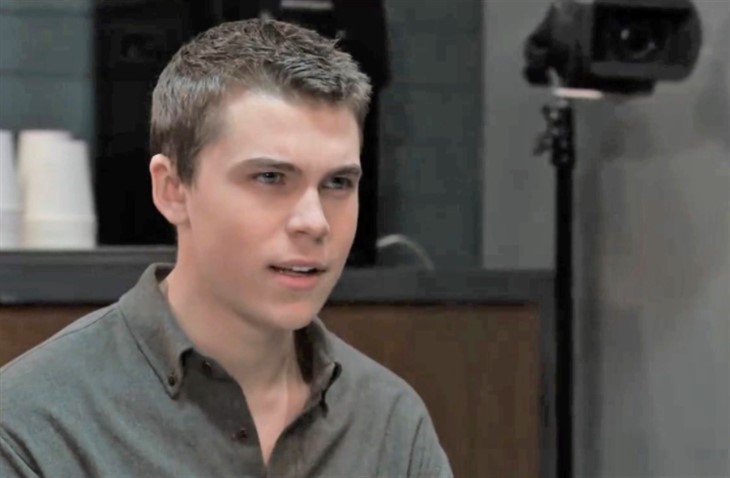 General Hospital (GH) spoilers for Thursday, May 6, 2021, reveal Cameron’s shock at his mother’s latest news and Carly bossing her way through Port Charles — as usual.

While many thought that Cam (Will Lipton) pulled the trigger that landed a bullet in Jason (Steve Burton), he was indeed in the wrong place at the wrong time. Jordan took a look at the security footage and realized Cameron didn’t do it.

Now that Elizabeth (Rebecca Herbst) has him home, she has to finally tell him the truth she just learned herself. She tells him it was Peter August (Wes Ramsey) who killed their beloved Franco (Roger Howarth) and not Jason. So, if Cam had shot Jason in revenge, he would have shot the wrong man. Will Cameron now play vigilante and complete the mission Dante (Dominic Zamprogna) never did? (Bad Dante!)

Dante is suddenly back on the force although he never did what Liesl’s (Kathleen Gati) click of a pen told him to do. So, that means he has to try to bring down Jason, despite the fact that in this case, Jason didn’t kill the man they think he killed. He did break out of custody, though, so that’s something.

And it’s Sam (Kelly Monaco) to Dante’s rescue as she tells him if he’s going to bring in Jason, then she will most certainly need her help.

Meanwhile, Jason and Britt (Kelly Thiebaud) wonder who the heck found them at the safehouse. Thankfully, for them, it’s just Spinelli (Bradford Anderson). He wants to check how they are but is soon summoned by Carly (Laura Wright).

While Carly is looking for Spinelli, Jax (Ingo Rademacher) is looking for Carly and finally finds her. She tells him all about the Five Families and then yells at him that he’s going to have to get used to having things the way she wants them.

GH Spoilers – A Night At The Savoy

Curtis’s (Donnell Turner) new club is finally open and Portia (Brook Kerr) stops by and spends some time with the new owner. They grow closer as they reminisce about old times, but Curtis warns her she should keep these memories in the past. Stay tuned to General Hospital weekdays to see how these stories play out.