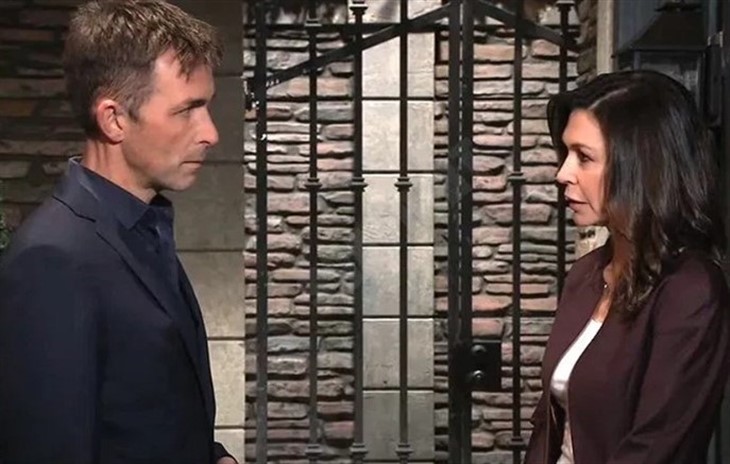 General Hospital (GH) spoilers for Friday, June 25, 2021, reveal Maxie’s lies catching up with her once again because all anyone wants to do is help her.

After Anna (Finola Hughes) pushed Maxie (Kirsten Storms) to be with Peter (Wes Ramsey) and then she and Valentin (James Patrick Stuart) neglected to tell Maxie (Kirsten Storms) that Peter was a maniac as soon as they learned the truth, all Anna wants to do is help her. And all Valentin wants to do is help Anna. Besides, he thinks Maxie’s baby will lead them to Peter, not knowing the baby he thinks is his, is actually Maxie’s. He also has no idea that Peter is allegedly dead.

So, Anna and Valentin travel into the woods to see what they can find and that’s where they meet Austin (Roger Howarth). He tells them what he knows but Valentin isn’t so sure he is telling the truth and asks Anna what her instincts are telling her. Will her instincts kick in and tell her that Maxie is lying and she knows exactly where her baby girl is?

Meanwhile, Austin finds himself running into Scott (Kin Shriner) at the Metro Court, and once again, everything will feel weird because Scott will just look at him with no thought that the man is a clone of his dead son.

Apparently, there is a lot going on in Carly’s (Laura Wright) hotel and restaurant when Carly isn’t there. Nina (Cynthia Watros) and Ava (Maura West) catch up and Nina confesses that she is not sure if Port Charles is still her home. She certainly doesn’t bother mentioning that she knows Ava’s daughter’s father is alive and tending bar with amnesia in Pennsylvania.

Lucy (Lynn Herring) also gets shocking news while dining. Does she get a look at Sasha’s (Sofia Mattsson) large belly? The woman who just found out she was pregnant a month ago. Sasha also worries about how she will tell Nina she is pregnant as if Nina is blind.

So, as Jason (Steve Burton) and Carly were arguing about his right to privacy and a love life at the boxing gym, one of their warehouses just blew up. There is definitely trouble coming from the Novak family and Brick (Stephen A. Smith) arrives to give them an update. Stay tuned to General Hospital weekdays to see how these stories play out.

The Bold And The Beautiful (B&B) Spoilers: Kiara Barnes Exit Date, Zoe Zips Out Of Town After ‘Quarter’ Reveal