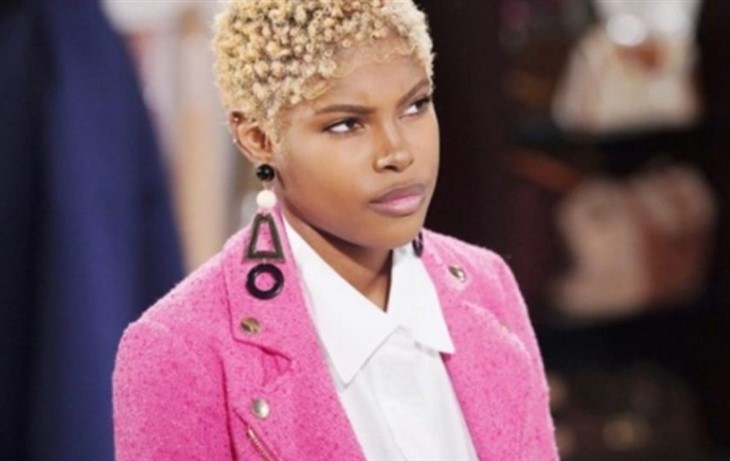 The Bold and the Beautiful spoilers reveal that Paris Buckingham (Diamond White) fears for her life. She’s heard about Quinn Forrester’s (Rena Sofer) killer reputation. It turns out that fear of getting murdered is why Paris hasn’t shared the “Quarter” bombshell yet. Brooke Logan Forrester (Katherine Kelly Lang) isn’t scared, though, and “saves the day” by taking control.

The Bold And The Beautiful Spoilers – Quinn Forrester’s Reputation

B&B spoilers reveal that Quinn has quite the reputation. Some of what people say about Quinn is true, some is a complete exaggeration and other stories had extenuating circumstances. However, Paris hears about Quinn’s ruthless reputation, including that she’s tried to have her enemies killed. Paris feels like she can’t keep the “Quarter” secret anymore but is too scared to say anything. According to an interview in SOD, Paris fears that if she crosses Quinn, then she will be attacked or even end up dead.

However, this fear is unjustified as Quinn hasn’t threatened Paris. She has used reasoning, explaining, assuring and even got down on her hands and knees to beg. So, there really is no reason for Paris to fear for her life. In fact, on the day of the vow renewal, Quinn once again begs Paris not to expose her fling with Carter Walton (Lawrence Saint-Victor).

The Bold And The Beautiful Spoilers – Brooke Logan Forrester Eavesdrops

The Bold and the Beautiful spoilers reveal that Brooke eavesdrops on Paris and Quinn’s conversation. Once again, Quinn starts talking about her sexual escapades with Carter in a crowded building. She promises that it will never happen again. Quinn reasons that there’s really no point since everyone thinks the woman was Shauna Fulton (Denise Richards).

Plus, Zoe Buckingham (Kiara Barnes) is overjoyed to be marrying Carter. As for herself, she is renewing her vows with Eric Forrester (John McCook). Paris hears what Quinn has told her before, that the truth will just cause a lot of pain for so many people.

After Quinn leaves the room, Brooke steps in and confronts Paris. She pleads with her to tell her everything. She probably uses the angle that she truly cares about Eric and if Quinn is hiding something, then she needs to know. It is teased that Paris will end up making a decision, which is to tell Brooke about “Quarter.”

Brooke is stunned to find out that Shauna isn’t the woman that slept with Carter, but that it was Quinn. Next, Brooke sets off to stop Eric from making a huge mistake as the vow renewal begins. We will have to keep watching the CBS soap to find out how this story ends.