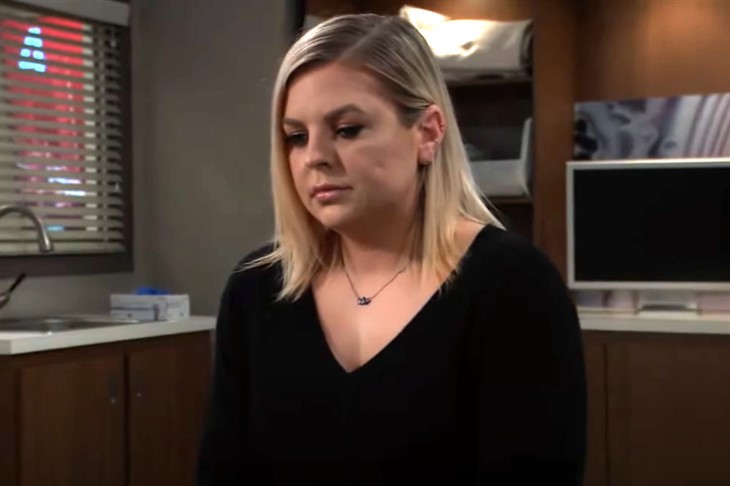 Maxie (Kirsten Storms) is desperate to see her baby and tells Brook Lynn (Amanda Setton) that she wants to pay a visit, ostensibly to see Brook’s baby, of course. Brook doesn’t like this idea at all. While she doesn’t want to admit how attached she is to this baby that isn’t hers, she also doesn’t want Valentin (James Patrick Stuart) getting suspicious, so she does everything to talk Maxie out of this visit.

Meanwhile, Maxie gets her own visit from Sam (Kelly Monaco), who still has questions about the night Maxie’s baby was kidnapped. Maxie starts getting flustered and asks Sam if she even believes her. It looks a bit like Sam doesn’t believe her story at all. In fact, she and Dante (Dominic Zamprogna) later go searching the area where Maxie gave birth and Austin (Roger Howarth) finds them. He tells the pair they haven’t searched a spot yet and we bet that’s the whole Crazy Nurse Chloe (Kimberly J. Brown) fell into.

GH Spoilers – A Wedding To Remember?

Over at the hospital, Willow (Katelyn MacMullen) tells Jackie (Kim Delaney) and Sasha (Sofia Mattsson) she knows she’s doing the right thing as they get her ready for this deathbed wedding. Chase (Josh Swickard) is already prepared and dressed in his tux and Violet (Jophielle Love) is even there to adorably wish him luck.

Little does anyone know that Finn (Michael Easton) is in his lab waiting for DNA test results. He later excitedly tells Elizabeth (Rebecca Herbst) he knows exactly why his original cure for Chase (Josh Swickard) didn’t work and only made things worse. He has the cure now, but will he get to Chase before he marries Willow? We all know Willow wants to be with Michael for some reason, but this marriage of inconvenience is bound to get in the way.

As for Anna (Finola Hughes), she thinks she has a lead on the man who caused this mess — Peter. But is she barking up the wrong deep freezer? Stay tuned to General Hospital weekdays to see how these stories play out.