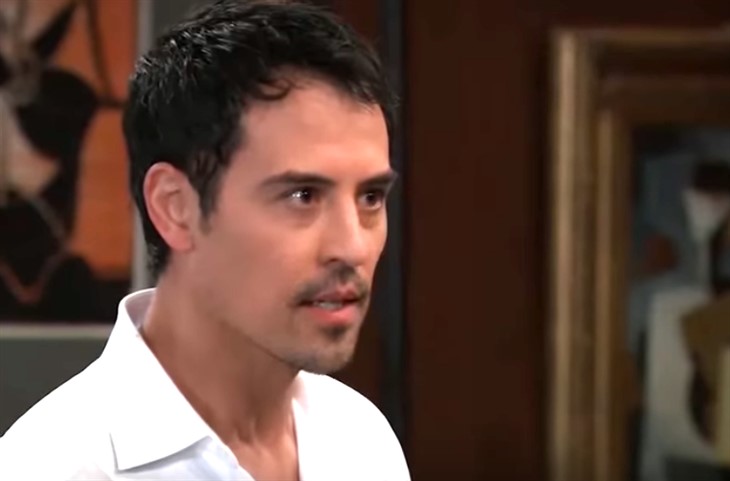 General Hospital (GH) spoilers for Friday, July 30, 2021, reveal in Port Charles, NY Nikolas trying to keep his cool as his life seems to spin more out of control.

General Hospital Spoilers – What Will Nikolas Cassadine Resort To?

As soon as Elizabeth (Rebecca Budig) says ‘Hayden’, Nikolas (Marcus Coloma) comes running. Not only is he the one who had her shot, he is also the one who ran her out of town in 2019, so he wonders which topic she wants to talk about. It turns out the writers aren’t letting Liz forget that she’s always known it was Nikolas who was behind the shooting and she tells him Sam has been poking around. In the other Port Charles, Nikolas already knows Sam (Kelly Monaco) is aware he ordered the hit, but in this Port Charles, it makes him nervous.

Nikolas also has a teenage son to deal with who wants his wife gone. While Nikolas suspects Spencer (Nicholas Chavez) is the stalker, he is in denial and Spencer has no idea his father suspects. That’s why he feels perfectly fine chatting up Ava (Maura West) and asking her why she sends Nik mixed signals. How much did he see when Nik and Ava hugged?

It also seems odd when Sam tells Shawn (Sean Blakemore) she has bad news. Is she going to tell him there’s absolutely no trace of Hayden at all?

Brook Lynn (Amanda Setton) and Valentin (James Patrick Stuart) seem to have a fight when she tells him he needs to back off. Are the lies getting to her? Or does Valentin seem to be getting closer to figuring out what happened to Maxie’s (Kirsten Storms) baby? She is also unnerved by Austin’s (Roger Howarth) presence but tries to get along with him.

Elsewhere, Chase (Josh Swickard) pushes himself hard to stand on his own two feet and be a husband to Willow (Katelyn MacMullen). Too bad Willow wants him gone so she can resume her relationship with Michael. It also looks like they are caught and something tells us Carly (Laura Wright) is the one who catches them. And she thought Willow was a happily married woman…Stay tuned to General Hospital weekdays to see how these stories play out.